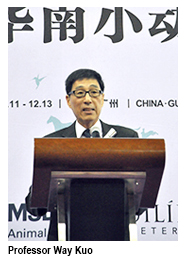 Professor Way Kuo, President of City University of Hong Kong (CityU), delivered a welcoming address at the 4th South China Small Animal Veterinary Conference co-organised by CityU on 11 December in Guangzhou.
Professor Kuo said the recent hazy weather lingering in mainland China was related to energy utilisation. Bad air adversely affected not only human but also animal health, he said, adding that in addition to conducting research into animal health, veterinarians and researchers also dealt with challenges to public health and food safety, such as chemical toxicity in food and infectious diseases related to contaminated animal feed.
A veterinary school could help to enhance public health and surveillance of food safety, he said.
CityU has proposed to establish an internationally accredited veterinary school in collaboration with Cornell University that would nurture well-qualified veterinarians. The proposal encompasses setting up a research centre to study epidemics and infectious diseases 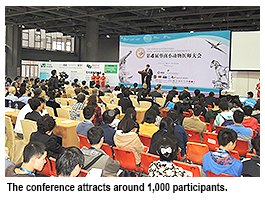 transmitted from animals to humans. The school would provide opportunities for continuous education and training to practicing veterinarians as well, he said.
Dr Howard Wong Kai-hay, CityU’s Executive Director of Life Sciences Programmes, said he was delighted to see CityU contributing to the veterinary sector in mainland China, adding that the conference signaled only the beginning of an extensive long-term collaboration between CityU and institutions in the mainland. He looked forward to more opportunities to work with mainland organisations in the future, he said.
The conference, which was held from 11 to 13 December, attracted around 1,000 participants, prompting Dr Wong to point out that Hong Kong’s veterinary sector could serve not only the local community, but may also promote the development of veterinary science in mainland China as well as in other places in Asia. 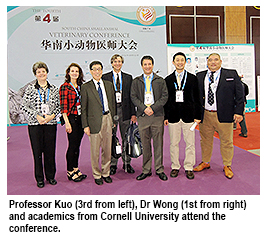 Launched in 2010, the South China Small Animal Veterinary Conference is a major annual event for veterinary professionals in the region. Most participants are practising veterinarians in southern China, and workshop speakers are
prominent clinicians from Hong Kong, Taiwan and the mainland. Veterinary experts from overseas also attended.
The conference aims to improve the quality of diagnosis and treatment, enhance exchanges of technological knowledge, promote outstanding corporations and foster the development of the veterinary sector.
CityU and the Hong Kong Jockey Club were taking part in the conference for the first time. Discussion items covered not only the diagnosis and treatment of diseases that affect dogs and cats but also those that impact horses. Topics on rare species, mammals and wild animals were also on the agenda.