Where does the world economy go from here? 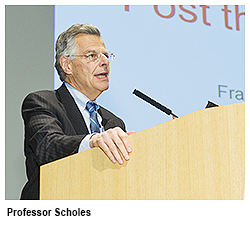 One of the world’s foremost thinkers on financial and economic issues presented a range of possible scenarios at a talk at City University of Hong Kong (CityU) that had the potential to characterise the development of the global economy over the next few years.
Professor Myron S. Scholes, the 1997 Nobel Laureate in Economic Sciences and the Frank E. Buck Professor of Finance, Emeritus, at Stanford University, was speaking under the auspices of the City University Distinguished Lectures on 13 November.
The title of his lecture was “Global Economy: Post the Global Financial Crisis”. CityU had conferred an Honorary Doctor of Letters on the speaker the day prior to his talk.
The key question Professor Scholes addressed was whether or not the global recession was ending or whether the debt-deleveraging overhang from the 2008 crisis would slow growth during this decade.
Clearly there were no easy answers, Professor Scholes implied. The major issues centred on debt—how much credit should a nation possess, is debt an obstacle or a springboard to economic development?—and the motivation to pursue growth. For example, whereas China and the US were keen to develop their economies, the Eurozone was prone to favour stability and consolidation, Professor Scholes said. 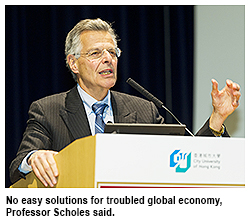 In his overview of the last decade, Professor Scholes identified several trends that have had the most impact on the global economy. China’s entry to the World Trade Organisation had had a major impact on international trade; the slowing down of the world economy had become strongly evident post 2008; and the 9/11 attacks and the ensuing military confrontations in Iraq and Afghanistan had led to monetary excess, lax regulations and asset bubbles.
For the next few years, Professor Scholes foresaw major growth in the US economy due to in-sourcing technology manufacturing, especially in areas such as robotics, computing, 3D printing and self-driving cars. Access and technology to exploit new energies would also benefit the US, he said, citing gas and shale sources as well as a growing call for micros grids, sensors and electric cars to boost efficiency and sustainability. A third factor that would impact the global economy would be the internationalisation of the renminbi, he added.
In terms of investment outlook, Professor Scholes said there was one school of thought that stated that, although we were slumped in a severe recession, recovery would slowly take place, a view shared by the US Federal bank. But another reading of the situation posits that debt, deflation and restructuring were so great that recovery would take years, and could only be achieved through huge government support.
Some of the major variables that could create more imbalance, or even derail recovery, were related to the amount of debt in the public sector; the stuttering growth experienced by the BRIC nations, suggesting the possibility of future trade wars; low population growth in areas such as Europe; and the problems that the ageing population in developing nations would initiate.
“There is a graying tsunami ahead,” Professor Scholes said.
Anyone looking for hot tips and crystal ball-like revelation about the planet’s economic outlook would have been disappointed. Professor Scholes was thorough in his overview and emphasised that the future was unclear. 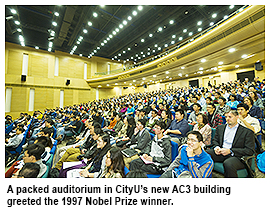 However, in response to a question from a student about tips for the future, Professor Scholes offered one piece of advice.
“Water,” he said. “If I were younger and looking for an investment opportunity, I would look at all things related to water.” He suggested that desalination, irrigation, clean-water technologies are possible areas of interest due to climate and geographical issues facing many parts of the world.
Professor Scholes is the co-originator of the Black-Scholes options pricing model, which is the basis of the pricing and risk-management technology that is used to value and to manage the risk of options contained in instruments around the world. For his work on “a new theory to value derivatives”, he was awarded the Nobel Prize in Economic Sciences in 1997.