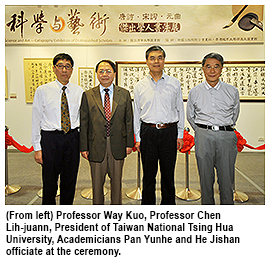 An opening ceremony was held on 11 November at Taiwan National Tsing Hua University. The title of the event was “Science and Art: Tang, Song and Yuan Poems—The Calligraphy Exhibition of the Distinguished Scholars”.
Distinguished scholars displayed their calligraphy skills at the opening, and a special gift of a calligraphy work with an inscription by the eminent Chinese scholar, Professor Jao Tsung-I, was presented at the ceremony, too.
The event was another cultural exchange activity between Hong Kong, Taiwan and the mainland. It followed the “Art Exhibition in Hong Kong by the Painting and Calligraphy Society of the Chinese Academy of Engineering” held by CityU and The Chinese University of Hong Kong from September to December 2012.
Professor Steve Ching Hsiang-hoo, CityU Librarian and one of the organisers for the exhibition, said the writing tools for Chinese calligraphy might not compare with computers in terms of speed, but calligraphers had more time to review their thoughts and make judgments during the writing process.
The exhibition helped promote academic exchange among the three Chinese communities, he added. 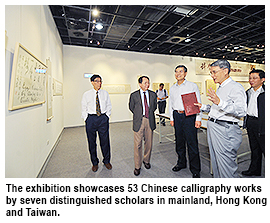 Professor Way Kuo, CityU President, said at the opening, “Many people may think scientists such as mathematicians and engineers were very different from artists such as calligraphers, painters, musicians and sculptors, with scientists stressing rationality, logic and empirical data, and artists inclining to sensation, intuition and creativity.”
“However, the works displayed in the exhibition are a good example of the integration of science and art, providing a great spiritual enjoyment to us,” he said.
Academician Pan Yunhe, Executive Vice-President of the CAE, hoped the exhibition could help young scholars and students in the three places understand the beauty of Chinese characters as well as the wonderful integration of science and art. Also, they could take pride in the beauty of Chinese culture, he added.
A total of 53 Chinese calligraphy works by seven distinguished scholars in mainland, Hong Kong and Taiwan presented Chinese classics from Tang, Song and Yuan poems at the exhibition.
The artists were Academician Pan Yunhe, Academician He Jishan, Academician Xie Heping, Academician Xu Yangsheng of the CAE; Professor Ambrose King Yeo-chi and Professor Wang Fan-sen of Academia Sinica; and Professor Cheng Pei-kai of CityU’s Chinese Civilisation Centre.

The artists not only excel in their respective specialised academic areas; they also have profound passion for Chinese literature, art and calligraphy.
A calligraphy exhibition entitled “Brushstrokes of Enlightenment: Aesthetics of Living—The Calligraphy Exhibition of the Distinguished Scholars” was organised by Taiwan Feng Chia University, following the exhibition at Tsinghua University. An opening ceremony was held on 13 November. The exhibition was co-organised by CityU Run Run Shaw Library and CAE. The calligraphy exhibition showcased 71 works of calligraphy from the above-mentioned seven scholars, as well as the work of Professor Chou Feng-wu, Professor of Chinese Literature at National Taiwan University and the winner of the Academic Award of Ministry of Education Taiwan.
The exhibition will relocate to CityU in March 2014.
​