From Confucian orthodoxy to Chinese modernity 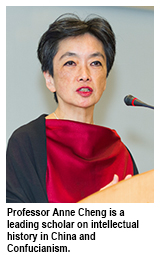 A pre-eminent scholar in the field of the intellectual history of China and Confucianism gave a talk on 16 October at City University of Hong Kong (CityU) as part of the on-going France-Hong Kong Distinguished Lecture Series.
Professor Anne Cheng, Professor and Chair in Intellectual History of China at the Collège de France, began by unpacking the terms “modernity” and “Confucianism” in the post-modern age, reminding the packed audience that “Confucianism” has no equivalent in the Chinese language and is in fact a recent neologism.
Professor Cheng went on to discuss how the changing perceptions of Confucianism in the twentieth century reshape our notions of modernity.
For example, Confucian/Asian values were seen as obstacles to the implementation of Western-style capitalism, economic reforms and modernisation by supporters of the May Fourth Movement, a political movement in China in the 1920s that protested against the government’s weakness, she said.
But by the end of the twentieth century, these values – the importance of the family, respect for hierarchy, motivation and thrift – were seen as essential to economic growth in East Asia in particular.
In other words, whereas Confucianism had been condemned to the museum following the decline of the Qing Dynasty at the start of the twentieth century because it was seen to thwart modernity, the economic success of Hong Kong, Singapore, South Korea and Taiwan from the 1970s onwards appeared to suggest that an alternative to Western-style capitalism was possible in Confucian heritage states.
In conclusion, she asked whether or not the various roles that Confucianism has been assigned – assisting economic boom, as a warrant for authoritarianism or as a pillar of Asian values – will contribute significantly to the development of democracy in the region.
Professor Cheng was born in Paris to Chinese parents and educated in the French state school system. She focused on classics and European language and literature before later devoting herself exclusively to Chinese studies. 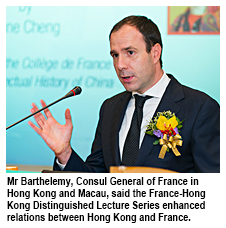 Mr Arnaud Barthelemy, Consul General of France in Hong Kong and Macau, praised the France-Hong Kong Distinguished Lecture Series for welcoming to Hong Kong some of the most distinguished researchers from France, including several winners of Nobel prizes. He singled out for praise Professor Philippe Ciarlet, University Distinguished Professor at CityU, for establishing the series of lectures in 2005.
Professor Paul Lam Kwan-sing, Acting President, said in his welcoming address that Professor Cheng’s translations of the Chinese classics were highly regarded in the field, and were “must-reads”.
For almost 30 years Professor Cheng has been involved in teaching and research on the intellectual history of China and Confucianism, initially at the CNRS (French National Center for Scientific Research), then at INALCO (National Institute for Oriental Languages and Civilizations), before her appointment to the Institut Universitaire de France and her recent election to the Collège de France.
The France-Hong Kong Distinguished Lecture Series is a series of high-profile lectures under the auspices of the French Academy of Sciences. It is co-organised by the French Academy of Sciences, the Consulate General of France in Hong Kong and CityU.