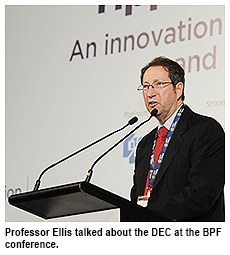 An exclusive gathering of business professionals in Hong Kong was treated to an overview of the new curricular focus on discovery and innovation at City University of Hong Kong (CityU) at the Business and Professionals Federation (BPF) of Hong Kong Tipping Point Conference on Innovation on 6 September.
In his specially invited plenary address, Professor Arthur Ellis, CityU’s Provost, talked about why CityU felt it was so important that discovery and innovation should take centre stage in its curriculum, and how important it was for young people in Hong Kong to have an opportunity to create new knowledge.
“Our new Discovery-enriched Curriculum allows young people the chance to embrace the unknown and take risks,” he said to the packed audience of entrepreneurs and professionals at the Hotel Icon in Tsim Sha Tsui.
Today, it was possible to learn almost anything from the internet, he said, except to find out where the next innovative breakthrough would take place.
“We are raising the bar at CityU to encourage students to create new knowledge, and to cultivate, curate and communicate that knowledge,” he said. “We are embedding discovery and innovation into the DNA of CityU.”
The Provost outlined several key initiatives that were supporting the DEC, such as the new Apps Lab, Gateway Education courses, the Ideas Incubator, the Discovery Labs, Project Flame, and training in intellectual property awareness.
Present at the Provost’s plenary were Sir David Akers-Jones, President of the BPF, Dr David Y K Wong, Chairman of the BPF and senior management from dozens of businesses and professional institutes in Hong Kong. 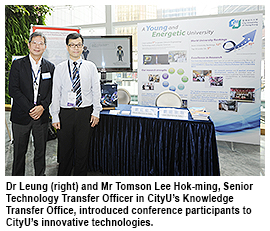 Also at the BPF conference, Dr Howard Leung Wing-ho, Assistant Professor in CityU’s Department of Computer Science, gave a hands-on demonstration of a piece of motion-capture technology that specifically showcased CityU’s achievements in discovery and innovation.
Taking the form of a game, the technology promotes a strong environmental message, requiring users to use their body movement to control an interface.