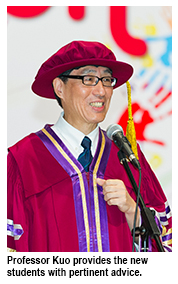 New students were treated to a memorable reception at the Student Orientation Welcoming Ceremony organised by Student Development Services at City University of Hong Kong (CityU) from 27 to 28 August. Among the attendance were the management of CityU.
The new additions to the CityU family were encouraged to “Discover & Innovate @ CityU” during their university careers.
At the ceremony, Professor Way Kuo, University President, welcomed the new students and encouraged them to equip and challenge themselves during their four years at CityU.
“An old Chinese saying goes, ‘It takes 10 years to sharpen your sword’. The University will give you four years to equip yourselves. You should think carefully about what you are going to do in these four years. You should not only challenge authority but yourselves as well. You may learn from the champion of a pan-European marathon who used to go cycle to school when he was a kid. But his bicycle was stolen and his family could not afford to buy him a new one. So he ran 10 kilometers every day to school. Practising day by day, he became a winner in the end. People who are successful constantly challenge themselves on their road to success,” said Professor Kuo. 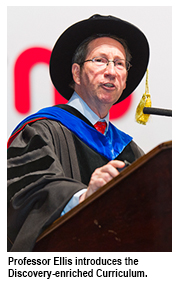 He also stressed that teaming up with others leads to success. He encouraged students to innovate and collaborate with their classmates.
“You may be great. But you will learn far more if you work together with your professors and classmates, and understand society. You will feel stronger after four years,” he said.
Professor Arthur Ellis, Provost, introduced CityU’s new spaces, our unique Discovery-enriched Curriculum, the Gateway Education courses, exchange and internship programmes, e-learning and m-learning initiatives, and the advisor and student mentor programme. He encouraged the students to learn to be professional by being confident, engaged and creative, and to learn by asking questions. 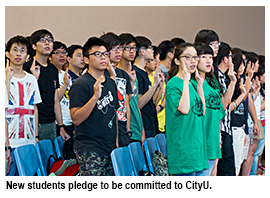 Timothy Lee Ho-yin, President of the Students’ Union, led the new students in pledging to live their student life at CityU to the fullest and to do their best at all times. They also vowed to broaden their horizons and seek new knowledge. Student representatives from the colleges and schools talked about their learning experiences at CityU, too, such as exchange and internship programmes, and different student activities. The representatives encouraged the new students to grasp every opportunity in the coming years to learn as much as they could.