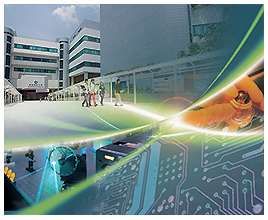 The academic performance of City University of Hong Kong (CityU) in engineering has shown outstanding result in the Academic Ranking of World Universities 2013 released on 15 August 2013 by the Center for World-Class Universities of Shanghai Jiao Tong University.
CityU ranked 1st in the greater China area including Hong Kong, and 25th worldwide, in the Broad Subject Field of Engineering/Technology and Computer Sciences, showing a steady climb in the past four years, and making a significant contribution to technological innovation in the region. Overall ranking of the University was in the 301-400 quintile in the new survey.
The survey also indicated that CityU had maintained its strengths, with Computer Science moving up to 42nd and Mathematics to 49th under the Subject Fields. We ranked 101-150 in Social Sciences under the Broad Subject Fields, while Economics/Business maintained its 76-100 ranking and Chemistry its 151-200 ranking.
“These encouraging results are powerful examples to propel us forward in the pursuit of excellence and to seek continuous improvement in every subject field within the University,” said Professor Way Kuo, CityU President.
He urged all departments and units to further enhance innovation and the integration of teaching and research to benefit our students and the advancement of society.