City University of Hong Kong (CityU) and the Shuangliu Government in Chengdu signed a collaborative agreement on 5 August for the establishment of the CityU Chengdu Research Institute (CityUCRI). 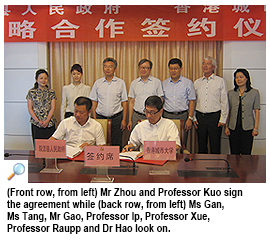 Chengdu, the provincial capital of Sichuan, is one of the most important economic, transportation, and communication centres in western China. Shuangliu County in the southern part of Chengdu ranks first in terms of economic strength in Sichuan Province.
Under the agreement, the Shuangliu Government will provide land and construct a building for CityUCRI, which will occupy a floor area of 15,000 square metres. The Shuangliu Government will also provide funding for CityU faculty and research staff to carry out research activities in CityUCRI. At the same time, CityU will coordinate grant applications and promote application-oriented research in CityUCRI.
It is anticipated that one to two research centres or platforms will be set up during the initial stage of operation, and the research output generated in CityUCRI will be transferred to practical uses.
Mr Gao Zhijian, Party Secretary of Shuangliu County, said it was the honour for the Shuangliu Government to cooperate with CityU to set up a research institute.
The Shuangliu Government emphasised science and technology development and innovative industries, and supported research on bio-medicine, new energy, high-tech manufacturing and electronic communications, he said, adding that CityUCRI would  enhance the social and economic status of the county.
Ms Tang Hua, Director for the Science and Technology Bureau of the Chengdu Municipal Government, said she welcomed the participation of CityU in this project. 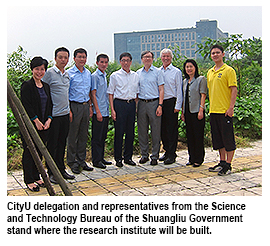 Chengdu was an important city in western China, she said, and more and more international companies were setting up branches there, including a state-of-the-art manufacturing base to be set up by a prominent French animal medicine production company. As one of the counties in Chengdu, Shuangliu is famous for its enthusiasm for research activities and knowledge transfer.
In addition, the Science and Technology Bureau of the Chengdu Municipal Government will fully support the development of CityUCRI, she said.
Professor Way Kuo, President of CityU, praised the collaboration with Shuangliu County. After signing the agreement, CityU would actively engage in encouraging its excellent research teams to undertake research projects in CityUCRI, he said.
Professor Gregory Raupp, Adjunct Professor of CityU and Director of the Macro Technology Works of the Arizona State University, was invited to join the delegation, and his research work on flexible electronics with CityU faculties will be introduced in CityUCRI.
It is hoped that the CityUCRI will make significant progress and remarkable contributions in the near future, benefiting both CityU and the development of western China.
CityUCRI is the University’s second strategic platform in China for research and development, incubation and innovation, and professional education and training; and it is CityU’s first research institute in western China.
Together with the CityU Shenzhen Research Institute in southern China, these two research institutes will significantly augment our ability to bid for research funding on the mainland at both the national and provincial levels. Moreover, they will promote CityU’s presence in and impact on China, contribute to knowledge transfer, and enable us to recruit high-quality students for our academic programmes.
The agreement was signed by Professor Kuo and Mr Zhou Xianyi, County Mayor of the Shuangliu Government. The signing ceremony was attended by Mr Gao, Ms Tang; Ms Gan Lijun, Head of United Front Work Department; Professor Horace Ip Ho-shing, Acting Vice-President (Research and Technology) and Acting Dean of Graduate Studies; Professor Xue Quan, Associate Vice-President (Innovation Advancement and China Office); Professor Raupp; and Dr Hao Gang, Assistant Dean of the College of Business.