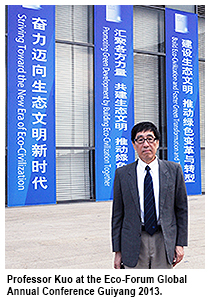 Professor Way Kuo talked about the importance of sticking to the principle of seeking truths from fact for cross-disciplinary scientific research in the Antarctica, which is the world’s last remaining pure land.
He took background radiation as an example, explaining that many people were scared about nuclear radiation, even more so after the Fukushima nuclear accident, without realising that we are all exposed to radiation every day, whether it is from building materials, the natural terrain, flying, bathing in hot springs, or medical examinations.
“While we all know about the risks from a high dose of radiation, the risks from a low dose radiation are much more complicated than what we think, and require further studies,” he said. 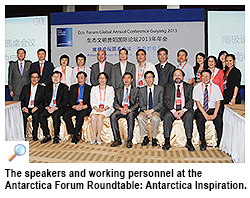 He went on to say that the Japanese like to bathe in hot springs, which are radioactive, yet the Japanese are the longest living people in the world. What’s more, he continued, Hong Kong’s background radiation is higher than that in other Asian cities, and yet its population enjoys the second longest life expectancy in the world.
“I am not saying these factors are absolutely related,” Professor Kuo said. “I am just stating the fact, and suggesting that we need to look into this with scientific research.”
At the Eco-Education Session, Professor Kuo started out by outlining problems related to global food safety, especially in mainland China, Hong Kong and Taiwan, as well as identifying some of the ever-expanding number of animal-induced diseases that affect humans, from SARS and AIDS to the recent H7N9 strain of bird flu. 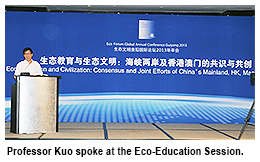 “About 70% of diseases today originated from animals,” he said. “It requires extensive research, especially locally and regionally, to safeguard public health. That is why CityU has proposed to establish a School of Veterinary Medicine. Recently, the Provost of Cornell University and the Dean of its College of Veterinary Medicine, the world’s top vet school, visited CityU. The two universities have agreed to elevate their partnership, seeking to establish a dual-degree programme in which students will receive both Cornell and CityU veterinary degrees, he said.
The Eco-Forum Global Annual Conference Guiyang was initiated in 2009 for the dissemination of the concept of eco-civilisation, showcasing the achievements of eco-civilisation and the promotion of eco-civilisation practice. In 2013, Eco-Forum Global Guiyang becomes China’s only state-level international forum on the theme of eco-civilisation.