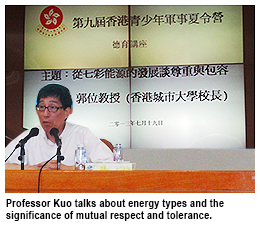 The best choice from “a spectrum of energies” and the significance of mutual respect and tolerance within Hong Kong society were the subjects of a talk by Professor Way Kuo, President of City University of Hong Kong (CityU), at the 9th Military Summer Camp for Hong Kong Youth on 19 July.
Professor Kuo said the various energies currently used could be divided into seven types: hydraulic, thermal (coal, oil and natural gas), nuclear, wind, solar, biological, and other types (including earth’s heat, tidal waves, ocean currents, methane, and so forth), collectively dubbed “a spectrum of energies”. 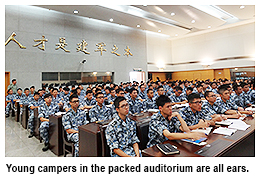 Each type of energy has its own advantages, he pointed out. For example, coal and nuclear energy are the cheapest while hydraulic and nuclear powers are the cleanest. Hydraulic power and wind and solar energies are renewable and won’t run out. On the other hand, all of them have drawbacks: coal mining causes heavy pollution and coal pit accidents (with the highest death tolls of all workplaces), while hydraulic power supply is affected by droughts and floods, and nuclear power worries people because of previous nuclear accidents.
So, which type of energy should we choose as the most suitable primary source of power for mankind? To this question, different sectors of society offer different answers, each justifiable in its own way. People have been debating about the topic, their arguments sometimes turning heated or even ugly with radical actions. 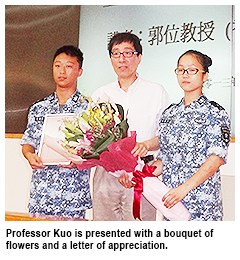 We must all exercise mutual respect and tolerance in trying to make the choice, Professor Kuo emphasised. We should weigh the pros and cons of each type of energy in terms of its economic benefits in economy and effects on the environment, and consider the interests and feelings of every sector of society, he added. The proper functioning of a modern society, he told the young campers, depends on its members’ respect for others’ rights and tolerance for one another’s wishes and needs, which alone can lead to harmony and mutual benefits for all people.
The Military Summer Camp for Hong Kong Youth was organised by the Concerted Efforts Resource Centre. Distinguished guests who attended that day’s event included Mrs Betty Tung, founding President of the Centre, and representative of the People's Liberation Army Hong Kong Garrison.