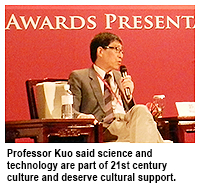 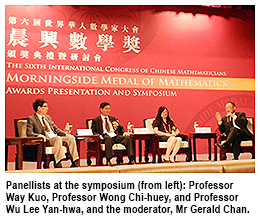 The title of the symposium, which was moderated by Mr Gerald L. Chan, Co-founder of Morningside, was “Unlocking our Future: How Government Policies can Foster Fundamental Science Development.” Professor Kuo was joined at the symposium by Professor Wong Chi-huey, President of Academia Sinica, and Professor Wu Lee Yan-hwa, President of National Chiao Tung University in Taiwan.
All three panellists agreed that government support for basic research not only promotes scientific advancement but also produces jobs, creating a huge impact on society as a whole.

“In addition to funding support, we should not forget government policy support, which directs where society moves and helps to provide incentive to investment in basic research. Taking the US as an example, the government doubled funding support for scientific research right after the financial crisis in 2008, in the same way as during the Great Depression years in the 1930s,” said Professor Kuo.
As part of the government policy, he said, the government should consider earmarking some of the income from the consumption of electricity and use it for basic research. 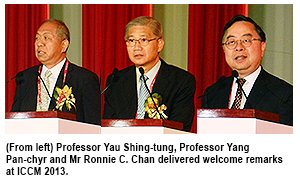 The ICCM, inaugurated in 1998 in Beijing, is a triennial event that brings together Chinese and overseas mathematicians to discuss the latest research developments in pure and applied mathematics. At the opening ceremony of ICCM 2013, six Morningside Medals were announced and presented to 11 distinguished Chinese mathematicians at universities around the world. Another award, the ICCM International Cooperation Award, was presented to Professor Jean-Pierre Serre, Honourary Professor at Collège de France.
Professor Yau Shing-tung, President of ICCM, Professor Yang Pan-chyr, President of National Taiwan University, and Mr Ronnie C. Chan, Co-founder of Morningside and Chairman of Hang Lung Properties, delivered the welcome remarks at the congress.