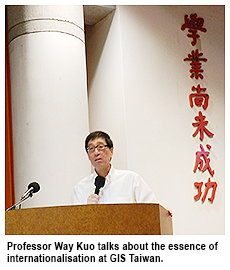 The President of City University of Hong Kong (CityU), Professor Way Kuo, said a good Tang Dynasty poem is a delight to read because of its content, although people often claim that it reads better in their own tongue or dialect, be it Taiwanese, Hakka, Cantonese or Mandarin. It is also beautiful, he said, when translated into other languages.
Professor Kuo made this comment in his keynote speech, “What Kind of Higher Education Can Enhance a Society’s Competitiveness”, on 9 July at the Global Initiative Symposium (GIS) Taiwan 2013.
In a globalised competitive environment, internationalised education is the only way forward, he said. “But when we talk about internationalisation, people always place great emphasis on speaking good English, forgetting that internationalisation is more about adopting international standards and modern practice, conducting problem-driven research and providing quality education with new academic programmes.”
Professor Kuo pointed out that society moves very fast and so does language. In the 1970s as students in Taiwan prepared to go abroad for overseas studies, for example, they would take special training, which included learning about cultural differences, table manners and the use of proper language. “We were advised not to use Chinese English, such as ‘Long time no see’,” he said. “But today this expression has gone into the official English language.”

Even English itself has undergone changes, Professor Kuo said. “Looking back in history, we will find that people who could speak Oxford English in the 18th century were regarded as high class. In the 19th century, English with a French accent was popular, while in the early 20th century when Germany became so strong, people tended to think English with a German accent was great. In the 1970s, Japanese English became popular with the advancement of Japanese technology and products. Today, the richest ethnic group in New York is Indian American. English with an Indian accent is considered cool.”
All of this tells us that language is important as a communication tool. Effective communication depends on real content.

Another aspect of internationalised education is integration of teaching and research, Professor Kuo said. “Why do you come to the university if you don’t teach? On the other hand, what can you teach if you don’t do research?” he said, emphasising that a teacher should focus more on teaching what most students cannot learn from reading the books by themselves.

In response to a question at the Q&A session regarding curriculum design, Professor Kuo emphasised that teachers should focus more on things that most students cannot learn by reading books. “They should ask more open-ended questions that inspire students to think of solutions,” he said. 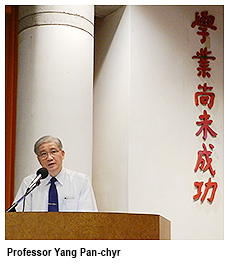 He pointed out that there is a system difference between our curriculum and the US curriculum, for example, where students spend more time reading and solving open-ended problems rather than concentrating on taking notes while the teachers deliver lectures. “After all, a degree is only a ‘decoration’,” he said. “What really counts is what you have learned at university.”
The other speaker at the day’s forum was Professor Yang Pan-chyr, President of National Taiwan University, who talked about strategies in developing Taiwan’s competitive niche in global higher education.
First established in 2008, GIS Taiwan is a student-organised and operated annual conference in Taiwan. It aims at focusing on issues of global concern from an East Asian perspective, seeking the exchange of thoughts and ideas from all corners of the world. Under the theme of Strategy under Competition, GIS Taiwan 2013 was the fifth symposium, which drew about 240 students from 14 countries and regions in Asia and Europe.