The annual City Literary Festival 2013 organised by the Cultural and Sports Committee, the Chinese Civilisation Centre (CCIV) and the Department of Chinese, Translation and Linguistics of City University of Hong Kong (CityU) was held on 19 and 20 April on the theme of “Humanity and Environmental Conservation”.

The Festival opened on 19 A 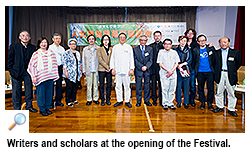 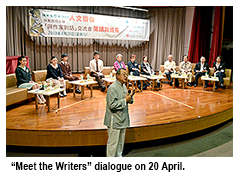 As in past years, the opening and the talk were followed by dialogues in
the afternoon between the guests and local audiences in four genre-groups, namely those of the essay, story, poetry, and cultural and art criticism.
The “Meet the Writers” session on the morning of 20 April, co-organised by CityU and the Education Bureau, was attended by students from local secondary schools.
Started in 2006, the annual City Literary Festival includes the City Literary Award competition, talks by the writers and literary scholars, and dialogues between them and local audiences.
​