Willingness to try: crucial to innovation 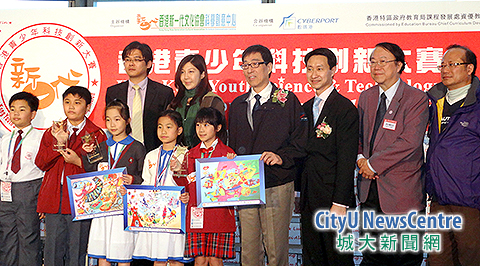 A willingness to try and explore is crucial to innovation, said Professor Way Kuo (fourth from right), President of City University of Hong Kong (CityU), at The Hong Kong Youth Science & Technology Innovation Competition 2012–13 Award Ceremony on 7 April.
“As the award winners will verify, innovation is not that difficult,” he said. “The challenge lies in limiting one’s imagination and being willing to think out of the box and put one’s thoughts into practice.”
“The Taiwanese singer Miss Rainie Yang, born in the 1980s, is known for her song ‘Wishful Thinking’,” said Professor Kuo. “The essence of the lyrics boils down to a willingness to try to explore, which will open the sky and create a colourful world.”
He went on to say that Albert Einstein, the great 20th century physicist, revealed that what set him apart from other people was that he would not give up after discovering the first needle in a haystack; he would look until all the needles had been found.
“This story tells us that innovative ideas, solutions and new knowledge will be found as long as we search, explore and pursue endlessly,” Professor Kuo said.