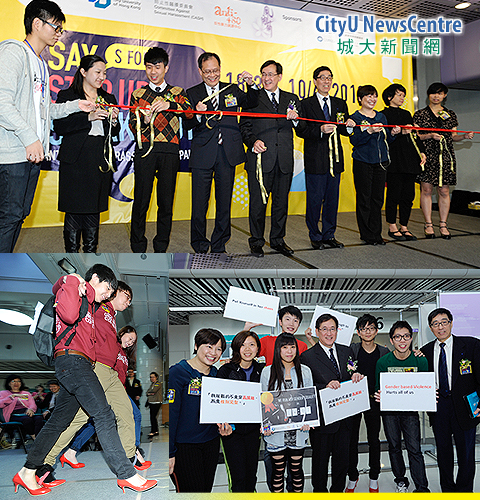 A lively programme of events that kicked-off the Anti-Sexual Harassment Campaign was held on 8 April at City University of Hong Kong (CityU).
These events included a dramatic rendering of a true story about sexual violence, a multimedia art exhibition, a four-legged race to highlight gender equality, and a slogan competition.
Dr York Chow Yat-ngok, the recently appointed Chairperson of the Equal Opportunities Commission, acted as one of the officiating guests at the kick-off ceremony.
He was joined by Professor Way Kuo, CityU President, Professor Paul Lam Kwan-sing, CityU’s Vice-President (Student Affairs) and the Chairman of the Committee Against Sexual Harassment (CASH) at CityU, Ms Linda Wong Say-yung, Executive Director of Anti-480 at the Anti-sexual Violence Resource Centre of the Association Concerning Sexual Violence Against Women, Timothy Lee Ho-yin, President of the Students’ Union, representative of the Drs Richard Charles & Esther Yewpick Lee Charitable Foundation, representatives of the Bodylogue Multi-media Art Exhibition, and representatives of Herstory Drama Performance.
The two winning slogans were “One More Silence? One More Victim!” and “We Need Your Commitment! Say No To Sexual Harassment!”
The events were co-organised by CASH and Anti-480 as a means of promoting greater awareness of sexual harassment among staff and students.