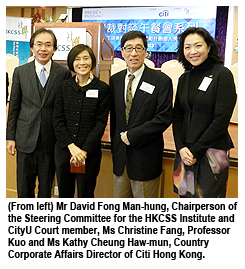 With interesting anecdotes, Professor Kuo explained to the audience the concept of “reliability”, still an unfamiliar subject to some. Citing examples from survival ratios after surgery, vehicle maintenance periods, and nuclear power plant safety and insurance, he vividly illustrated the close relationship between the concept of reliability and our daily life and a wide range of other topics.
“People have gradually come to realise that the theory and method of reliability apply not only to the manufacturing and modern hi-tech industries but also to NGOs such as the social service industry and educational and public undertakings,” said Professor Kuo. “Reliability has something to do with mobile phones, iPads and other tablet computers, video game consoles and other electronic products that are parts of our daily life. It’s necessary to publicise the concepts of reliability and innovation as they  will give rise to new concepts and methods, which in turn will sustain economic growth, boost industrial safety, facilitate social progress and improve people’s well-being.” 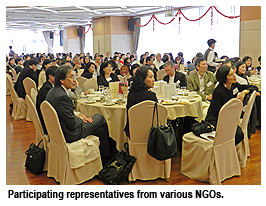 More than 150 people attended the luncheon and the prize-giving ceremony, of whom about 100 were CEOs and senior administrators of NGOs, the prize winners of this year and their trainers.
“CEOs Meet CEOs Luncheon Series” is an annual event for the Hong Kong Council of Social Service (HKCSS) Institute, organised by HKCSS and sponsored by the Citi Group. The keynote speakers from the last five years were distinguished guests from the government, the educational circles and the business sector. Ms Christine Fang Man-sang, CEO of HKCSS, introduced Professor Kuo in her welcoming speech and made a special point of thanking him for accepting their invitation to address the gathering.