Three scientists at City University of Hong Kong (CityU) took second-class honours in the 2012 State Natural Science Awards (SNSA) and the 2012 State Scientific and Technological Progress Awards (SSTPA), in recognition of their outstanding achievements in research. 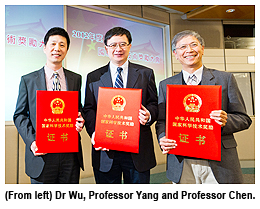 Chair Professor Yang Tong, Head of the Department of Mathematics, and Chair Professor Ron Chen Guanrong, of the Department of Electronic Engineering, received the SNSA second-class award. Dr Wu Yufei, Associate Professor of the Department of Civil and Architectural Engineering, won the SSTPA second-class award.
The SNSA and SSTPA – among the highest honours in the field of science, technology and engineering in China – were conferred at a presentation ceremony held on 18 January in the Great Hall of the People in Beijing, during the annual National Science and Technology Awards Conference.
Professor Way Kuo, CityU President, said in his congratulatory remarks, “The SNSA testifies Professor Yang’s excellent contributions to science through his strenuous and persistent efforts over the years. The achievements of Professor Chen and Dr Wu are also widely recognised. All of us at CityU are proud of their outstanding performance that earned them the awards.”
Professor Kuo added that the honours in both the SNSA and SSTPA showcased CityU’s strengths and achievements in both basic and applied research. CityU will continue to actively promote academic studies for social and technological advancement.
Professor Yang was the only individual scientist from Hong Kong who won the 2012 award. “I am very delighted as the award represents recognition of my research work over the years,” he said. 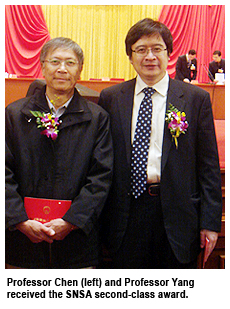 In his award winning project, “Mathematical Theories for Conservation Laws and Boltzmann Equation”, Professor Yang successfully developed mathematical theories from physical models. His collaboration with Professor Liu Tai-ping, Emeritus Professor of the Department of Mathematics at Stanford University, established a functional (named the “Liu-Yang Functional”) that solved an important and difficult mathematical problem. The functional led to the definitive settling of the well-posedness theory for conservation laws, and can also be applied to other disciplines.
Conservation laws study the motion of fluid substances on a macroscopic scale, while the Boltzmann equation describes the changes of distribution of particles on a mesoscopic (between macroscopic and microscopic) scale. Professor Yang and his collaborators decomposed the Boltzmann equation so that it can directly apply some of the analytical techniques used for conservation laws.
Professor Chen’s award for his project titled “Fundamental Theory and Applications of Several Kinds of New Non-linear Circuits and Systems” was his second SNSA since 2008. His project is interdisciplinary, involving the fields of complex systems, non-linear circuits and information sciences, an