CityU receives RMB31 million for research on the mainland

Research teams at the City University of Hong Kong Shenzhen Research Institute (CityUSRI) were awarded RMB 31.64 million for funding 59 research projects on the mainland in 2012. Compared with previous year’s funding and the number of projects granted, this represents a notable increase of 177% and 168% respectively. 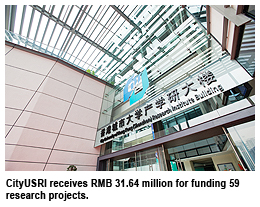 These figures reflect the high level of confidence that funding bodies have in CityU and CityUSRI, making 2012 a fruitful year for them.
Professor Horace Ip Ho-shing, Acting Vice-President (Research & Technology) of CityU, said the dramatic growth both in the number and the amount of mainland funding is a testament to CityU’s pre-eminent status in research and commitment to research excellence and technology transfer on the mainland.
“I offer congratulations to our faculty members and researchers who were successful in securing the funding, and give my sincere thanks to colleagues at CityUSRI and our Research Grants and Contracts Office for providing valuable advice and a high standard of administrative support,” said Professor Ip.
One of the major sources of funding was the National Natural Science Foundation, which supports research projects that accelerate the progress of science and high technology, as well as the socioeconomic development of China. Other funding sources included grants from the Guangdong Natural Science Foundation, and Science Technology and the Innovation Committee of Shenzhen Municipality. Contributions from academic and commercial collaborators have also been received. 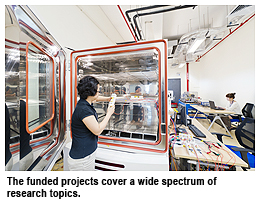 CityUSRI was established to serve as a base for research, professional education and incubation on the mainland. Since it began operating in 2008, CityUSRI has conducted extensive research in support of social and economic advancement. The marked increase in funding and the number of research projects in 2012 reveal an alignment of research goals between CityUSRI and mainland funding agencies.
In recognition of the outstanding performance of CityUSRI in 2012, the Science Technology and Innovation Committee of Shenzhen Municipality has given four prizes to CityUSRI for its staff’s efforts in introducing new research centres, nurturing talents, organising academic conferences and conducting first-rate research over the past year.