Professor Way Kuo, President of City University of Hong Kong (CityU), delivered a keynote presentation at the Fourth POMS-HK International Conference held on 3 January at the Run Run Shaw Creative Media Centre. The title of his presentation was “Safety and Operations Management of Nuclear Power Plants”. 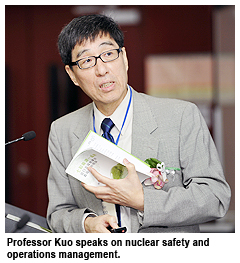 Professor Kuo began his speech by analysing the main factors involved in three major nuclear accidents since the world’s first nuclear plant was set up in the 1950s, namely, the Three Mile Island accident in the US in 1979, the Chernobyl accident in the former Soviet Union in 1986, and the Fukushima nuclear accident in Japan in 2011.
“There is one common factor in all three incidents: they were caused, to a large extent, by human errors,” Professor Kuo pointed out.
He went on to say the earthquake that hit Japan on 11 March 2011 did not damage the Fukushima nuclear power plant, but the tsunami it triggered flooded the plant and destroyed the power supply system. This made it very difficult to cool down the reactors whose core temperature can reach over 1,000 degree Celsius.
“Actually, the disaster was caused by a combination of poor maintenance, logistics and management. The back-up pump, gas generator, AC and DC power supplies all failed to work. In fact, Japan has a bad track record in terms of nuclear plant maintenance. In addition, sea water could have been used to cool down the reactors but the management, still hoping to save the reactors, was reluctant to make the decision because the power plant was worth US$10 billion,” he said.
“Judging from the past record, nuclear power is safe, and it’s cleaner than other energy sources. In many cases, the human factor is the problem or the bottleneck for nuclear safety,” he added.
We have coal, oil, natural gas, nuclear, wind, solar, bio and even tidal energy, but each of these forms of energy has its own advantages and drawbacks in terms of reliability, environmental impact, availability and economic value.
“Coal is the most popular fuel used to produce power, but every year thousands of miners die because of coal mining accidents. And China has to spend 5.8% of its GDP to rectify the damage caused by coal mining,” he said.
He pointed out that people are afraid of nuclear power partially because of psychological reasons. “We should make our decisions based on the reliability and maintainability of the energy, taking away the psychological factors,” he concluded.
Professor Kuo’s talk was based on discussions in his two books, Importance Measures in Reliability, Risk, and Optimization: Principles and Applications and A Spectrum of Energies: Reflection of Energy and Environmental Protection in the Wake of the Fukushima Nuclear Accident.
He was one of the two keynote speakers at the two-day conference hosted by the Production and Operations Management Society (POMS) - Hong Kong Chapter and Department of Management Sciences of CityU. 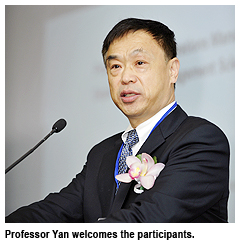 The theme of this year’s POMS annual meeting was “Interdisciplinary production and operations management”. Production and operations managers in all organisations today are facing more challenges, and the interaction of operations with other functional areas has become increasingly important.
In his welcome speech, Professor Yan Houmin, Dean of the College of Business, said “The core value of POMS-HK is research — the pursuit of research excellence. In this conference, we will report what we are doing and find out new directions for further research.”
The POMS Hong Kong Chapter was set up in March 2009, with the objective of encouraging exchange of ideas, experiences, and knowledge among scholars and professionals in Hong Kong in the field of production and operations management, and to foster the integration between Hong Kong and the international POM community.