Quality and culture of change key to modernising industrial engineering 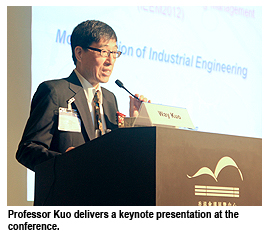 Quality and a culture of change are keys to modernising industrial engineering, said Professor Way Kuo, President of City University of Hong Kong (CityU), at the IEEE International Conference on Industrial Engineering and Engineering Management 2012 on 11 December.
The conference was hosted by leading universities in Asia with CityU acting as a co-organiser for the event, which attracted around 500 participants from 50 countries. Running from 10–13 December, the conference brought together researchers and practitioners from different branches of industrial engineering and engineering management.
One of the key issues addressed at the conference was the development of industrial engineering and what it takes to succeed in today’s internationalised marketplace. Professor Kuo began his speech with an overview of the history of the industrial revolution, and how it progressed from mass production geared towards greater efficiency and productivity. In the next stage, engineers focused on providing more choices in a process that came to be known as mass customisation. The tremendous variety we now enjoy in clothing, Professor Kuo said, is just one example of how manufacturing has evolved to give the customer more choice. 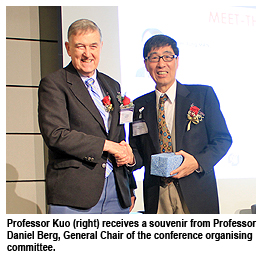 Today, quality represents a second industrial revolution that is just as important as the first industrial revolution because it enhances our quality of life. This revolution is still on-going, however, and to fully realise it we must create a culture of change. To improve society, industrial engineers must ask what they can do beyond being more efficient and effective. Accountability at all levels is the answer, Professor Kuo believes.
To illustrate his point, Professor Kuo referred to his experiences in academia. In the old days, professors were considered infallible, but then in the 1980s universities in the US introduced teaching evaluations by students which, at first, was resisted. However, faculty members came to understand that if teaching was not evaluated within the university, then eventually this would happen by society at large.
Professor Kuo also drew an example from his experience as a young engineer at AT&T Bell Labs. At that time, AT&T was a giant. It was the biggest company in the world, greater in size than the sum of the next nine largest companies put together. Yet today AT&T is far less noticeable. What happened?
Although AT&T employed many highly intelligent people, it did not recognise important new developments such as mobile phone technology, 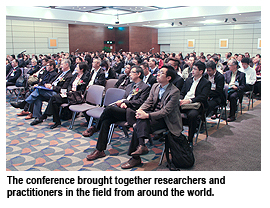 despite the company’s focus on innovation, said Professor Kuo. The concept of ordering tickets via phone, for example, was dismissed as a “stupid idea” in the old days.  Since then, companies such as Nokia and Motorola have come to the fore but then fell back due to a lack of vision. Today it is a Korean company, Samsung, that dominates. However, as Professor Kuo says, “they won’t stay at the top if they don’t work hard.”
For a company to succeed, it must be customer and quality driven. This is what has happened in US universities and why they remain so strong. Summarising what needs to be done both in the field of engineering and academia, Professor Kuo said a culture of change and better communication are essential.
There will be resistance from all directions when we initiate change. “When we deal with resistance, we need to be more persuasive. We need to be more profit driven, performance driven, and we need to be more mission driven,” he said.