The Painting and Calligraphy Society of the Chinese Academy of Engineering (CAE) is holding its first ever art exhibition in Hong Kong, showcasing 120 artworks by 14 of its academicians. This large-scale exhibition is held as part of the celebrations for the 15th anniversary of the return of Hong Kong to China. 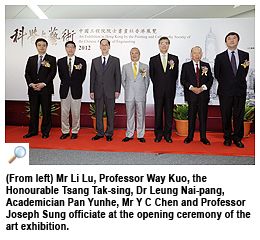 Titled “Science and Art – Integration of Scientific Reasoning and Artistic Minds”, the exhibition aims to help students better understand the importance of integrating science and technology with art, as well as enhance their knowledge about traditional Chinese art and culture.
The event, co-organised by City University of Hong Kong (CityU) and The Chinese University of Hong Kong, not only displays the artistic achievements of the academicians, it also encourages local tertiary institutions to nurture students’ talents and interdisciplinary knowledge.
Membership of the CAE is the highest academic title in engineering science and technology in China. CAE members are well known for their professional attainments, but many of them also excel in art, making them excellent role models for life-long learning and cross-disciplinary achievements.

A 17-member delegation from the CAE Painting and Calligraphy Society attended the opening ceremony of the exhibition today on 26 September at CityU to mark this momentous occasion. Among the delegates were Academician Pan Yunhe, Executive Vice-President of CAE, Academician Xie Heping, Academican He Jishan, Academician Wang Xiaodong and Academician Shen Dezhong.
Speaking at the opening ceremony, Academician Pan said while CAE members were committed to promoting engineering development in the nation, they also cared about blending art with science. It was hoped that through this exhibition they could demonstrate the beauty of this integration, he said.
“Local tertiary institutions are also encouraging their students to merge science and art as part of their whole-person development. A series of interactive activities between the academicians and students held during the exhibition will contribute to enhancing mutual exchanges, as well as help students develop scientific rationality and artistic minds,” he said.
Welcoming the CAE to hold its exhibition in Hong Kong, Professor Way Kuo, President of CityU, said integrating art and science had a long history, which was also a trend in today’s culture. The academicians participating in the exhibition were excellent examples of this movement, serving to stimulate student interest, too, he said. 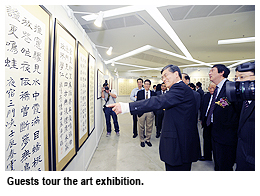 Professor Joseph Sung Jao-yiu, Vice-Chancellor of The Chinese University of Hong Kong, agreed that art and science were inseparable. He said that he had become more aware of the beauty of calligraphy after he had studied it in more detail, discovering its spiritually relaxing properties at the same time.
Other officiating guests at the ceremony included the Honourable Tsang Tak-sing, Secretary for Home Affairs, Dr Leung Nai-pang, Pro-Chancellor of CityU, Mr Li Lu, Deputy Director-General of the Department of Educational, Scientific and Technological Affairs of the Liaison Office of the Central People’s Government in the Hong Kong SAR, and Mr Y C Chen, Honorary President of the United Zhejiang Residents Associations Ltd.
The exhibition will be held at three different venues: the Run Run Shaw Creative Media Centre and Run Run Shaw Library of CityU, and Sir Run Run Shaw Hall of The Chinese University of Hong Kong. In addition, CAE members will share their experience with young students through lectures and seminars, and guided tours around the exhibition. A book exhibition will be held, too
The event is supported by the Home Affairs Bureau and the United Zhejiang Residents Associations Ltd.