​City University of Hong Kong (CityU) launched the “Cutting Food Waste” campaign in March 2011 and the “Zero Food Waste in CityU” campaign in January this year, with an aim to arouse the attention of CityU members to cherish food and promote reduction and recycling of food waste. 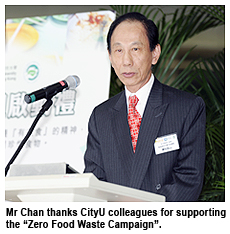 A new initiative, “Zero Food Waste Week”, that adds momentum to reducing food waste has been launched on campus. It is part of the “Zero Food Waste in CityU” that was jointly launched by CityU and Greeners Action. It will run from 25 to 29 September. The aim of the activities during the week is to encourage CityU students and staff to cherish food and help build a “zero food waste campus”.
At the kick-off ceremony on 25 September, Mr Gabriel Chan Sai-man, Chief Administration Officer of CityU, thanked all colleagues and collaborative partners for their hard work, saying the campaign was having a positive effect.
In addition, Mr Tony Tung Chun-hung, Facilities Manager in the Campus Development and Facilities Office, reported on the achievements of the campaign. The annual CityU Banquet had reduced the number of courses from eight to six, he said, and students were more sensitive to food waste at high-table dinners at student residence halls. 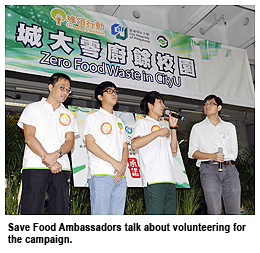 Restaurants on campus have also taken achievable action to support the campaigns. They are offering a HK$1 rebate to diners who order smaller rice portions, providing six-course low-carbon banquets, and suspending buffet salad bars.
In addition, the University has been collaborating with a recycling agent to process food waste into fish feed since August 2011 to help minimise the amount of garbage dumped in local landfill sites and poisonous gases released. All seven catering outlets on campus support this initiative, transforming daily food waste into useful products. 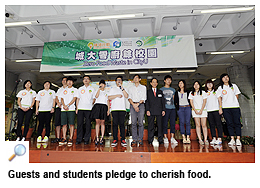 Several of the Save Food Ambassadors recruited to support the campaign “Zero Food Waste in CityU” shared their experience as volunteers at the launching ceremony on 25 September. They said other CityU students could help promote the key message of the campaigns by reminding each other about environmental issues.
Other activities during “Zero Food Waste Week” included a tongue-twister competition, a debate on food waste policy, uploading photos to Facebook, and a related exhibition.