​
Professor Daniel Ho Wing-cheong from the Department of Mathematics and Professor Pan Haihua from the Department of Chinese, Translation and Linguistics at City University of Hong Kong (CityU) have been selected as Chang Jiang Chair Professors 2011. They will collaborate with leading mainland universities to nurture professionals and conduct research.
Coordinated by the state’s Ministry of Education, Chang Jiang Scholars Programme is one of the major talent incubation programmes. The programme united outstanding academics from different disciplines to conduct research and teaching at higher education institutions of mainland China. This year, 52 scholars from leading universities all over world were selected as Chang Jiang Chair Professors. 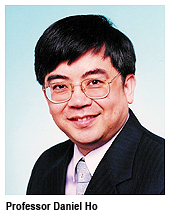 Professor Ho, who joined CityU in 1989, is an expert in control theory. He said the award recognised his efforts in teaching and research over the years. Professor Ho has been closely linked with mainland universities for a long time; and he will collaborate with Nanjing University of Science and Technology (NUST) to supervise PhD students to conduct research in the area of control theory and control engineering. He will also host seminars, lectures and workshops at NUST.
Control theory is a cross-disciplinary academic topic, covering applied mathematics, engineering, economics and communications disciplines etc, Professor Ho explained. With the advance development of Internet and communications, network science, one of the academic fields under control theory, will be a new research focus.

Professor Pan is a linguist who joined CityU in 1995. He is one of the five Chang Jiang Chair Professors from the Humanities and Social Sciences, and the only one from linguistics this year. Professor Pan said he is honoured to be selected as Chang Jiang Chair Professorship, one of the top awards in higher education of mainland China.
Professor Pan will collaborate with Beijing Language and Culture University to supervise PhD students, teach them linguistics and semantics, and help nurture young scholars. He will team up with scholars from Germany, the US, Hong Kong and mainland China to establish an international research group to conduct linguistics research.
The Chang Jiang Scholars Programme is one of the Ministry of Education’s major talent incubation programmes. With its mission focused on the recruitment of professors, appointment of chair professors and launch of the Chang Jiang Scholars Achievement Award, the programme has earned wide public acclaim from academics and the higher education sector. Since 2001, 14 academics at CityU have been awarded Chang Jiang Scholars.