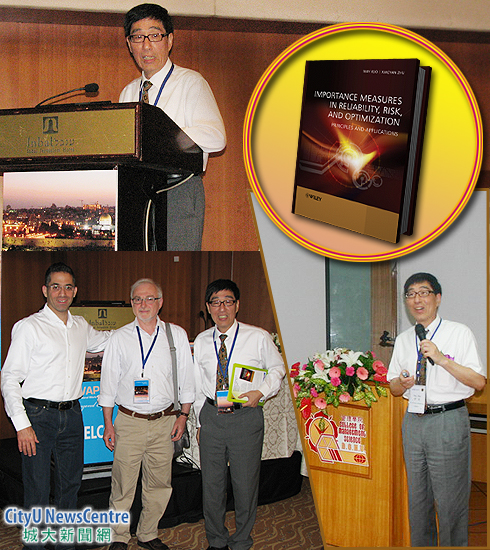 The President of City University of Hong Kong (CityU) has delivered keynote addresses at several major international conferences recently.
Professor Way Kuo delivered the closing speech at the Sixth International Workshop on Applied Probability in Jerusalem on 14 June with a talk titled “Reliability Importance Measures”. Moreover, he gave an opening address on “Importance Measures in Reliability” at the 2nd International Conference on the Interface between Statistics and Engineering at National Cheng Kung University in Taiwan on 23 June.
President Kuo regularly receives invitations from around the world to talk about his research into reliability and survivability. His new book Importance Measures in Reliability, Risk, and Optimization: Principles and Applications, 440 pages, co-authored with Dr Zhu Xiaoyan and published by New York: Wiley in June 2012, is the only one of its kind to deliberate on the theoretical aspects of importance measures for reliability improvement and system risk identification.
In his latest book, Professor Kuo presents importance measures as a design tool for solving real-world, large-scale decision-making problems. He discusses design concerns about the safety of nuclear power plants in general as well as his past research in the field, which he began well before the Fukushima nuclear accident last year.
During these recent conferences, President Kuo promoted CityU as a modern university to the broad academic and professional communities.