​Professor Way Kuo, President of City University of Hong Kong (CityU), delivered a talk titled “Reliability and Survivability: Nuclear Energy and the Future of Energy” at the 11th General Assembly of the Chinese Academy of Engineering (CAE) on 12 June. 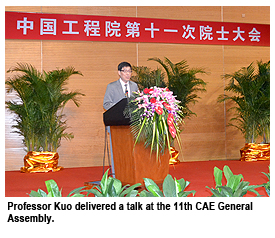 The General Assembly is the most important biennial event for the science and engineering sectors in mainland China. The opening ceremony on 11 June at the Great Hall of the People in Beijing this year was attended by President Hu Jintao, Premier Wen Jiabao and other senior Chinese officials.
Six members delivered speeches at the event, including Professor Kuo who is a foreign member. Newly elected members of CAE were awarded certificates at the assembly.
The development of nuclear energy and other forms of energies has become a hot topic around the world since the Fukushima nuclear accident, Professor Kuo said. Bowing to political pressure, the German government announced two months after the Fukushima accident that it would shut down its nuclear power plants by 2022. An analysis estimated that phasing out nuclear power would cost Germany US$1 trillion. Meanwhile, the Japan government remains undecided about nuclear energy.
Professor Kuo said it was important to take a long-term view and see the bigger picture. For example, even though torrential rain in southern China in June 2011 caused serious flooding in 13 provinces and affected as many as 8 million people, the rain was much-needed and helped relieve one of the region’s worst droughts in 60 years.
Energy can be generated by fossil fuels (coal, petroleum and natural gas), nuclear fission, wind, the sun, biofuels and others (tidal wave, earth’s heat, ocean currents, etc). Professor Kuo said each of these energies has different advantages and drawbacks in terms of efficiency, reliability, environmental impact, availability and economic value. While some concerns about the drawbacks are valid, some are just irrational fears. Some need our close attention, but they are neglected. Professor Kuo said we need to understand scientifically the correlation between energy and environmental safety.
Whatever energy we use, Professor Kuo said, we must consider three important factors: source, reliability and sustainability, and economic development.
In conclusion, Professor Kuo said since Fukushima was a natural disaster aggravated by human error, the lesson we should learn is that enhancing reliability is essential to the development of modern technology.
​