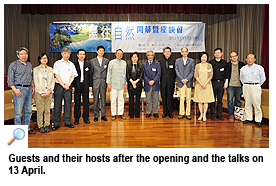 The annual City Literary Festival 2012 organised by the Cultural and Sports Committee, Chinese Civilisation Centre (CCIV), and Department of Chinese, Translation and Linguistics of City University of Hong Kong (CityU) was held on 13 and 14 April on the theme of “Longing for Nature”.

The Festival opened on 13 April. In his opening speech, Professor Cheng Pei-kai, Director of CCIV, highlighted the aim of the literary event, namely to stir up interest in creative writing and, in turn, to foster a love for reading among young people in Hong Kong and Macau.

As in past years, the opening and the talks were followed by dialogues in the afternoon between the guests and local audiences in four groups, namely essay, story, poetry, and cultural and art criticism.

For the second year, the Education Bureau of Hong Kong co-organised a “Meet the Writers” session on the morning of 14 April. The writers shared their experience with enthusiastic teachers and students from local secondary schools.

Started in 2006, the annual City Literary Festival includes the City Literary Award competition, talks by the writers and literary scholars who serve as adjudicators, and dialogues between them and local audiences. These activities are co-organised by the Hong Kong Arts Development Council, the Chinese Language Education Section of the Curriculum Development Institute at the Education Bureau and Macao Foundation. Hang Seng Bank is the sponsor.