Professor Lu Jian, Dean of the College of Science and Engineering and Chair Professor of Mechanical Engineering at City University of Hong Kong (CityU), has been elected a Fellow of the National Academy of Technologies of France (NATF) in recognition of his contributions to the fields of materials science and engineering, mechanical engineering and mechanics. This brings the number of national academicians at CityU to 12. 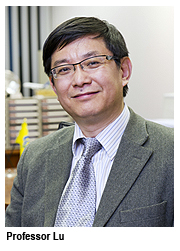 Professor Lu stands at the forefront of innovation in the study of the behaviour of mechanical structures. He is mainly engaged in areas such as material mechanics, experimental mechanics, residual stress, surface engineering and computational simulation. His work focuses on both scientific advancements and applications.

His papers on mechanical system prestress engineering, surface nanocrystallisation and nanomechanics, biomaterials and mechanical properties have captured widespread interest among scholars and have had a profound impact in their respective fields.

After obtaining his doctorate degree in 1986, Professor Lu began fundamental and applied research on residual stress at the French Technical Centre for Mechanical Industries. Residual stress refers to stresses existing within a body in the absence of external loading or thermal gradients.

Professor Lu was interested in how residual stress is generated, the role of residual stress in the work cycle of materials, and how to make use of prestressing force in product design to produce airplanes, high-speed trains and cars that are lighter, safer, more energy-saving and more environmentally friendly.

In addition, Professor Lu has enjoyed remarkable achievements in the field of surface engineering. The surface nanocrystallisation technology he invented can greatly enhance the low temperature diffusion ability of materials. For instance, the traditional vascular stent made from nickel-titanium alloy often releases nickel ions which are not conducive to the growth of cells in the human body. Using this new technology for treating the nickel-titanium memory alloy surface, it can make vascular stents that release fewer nickel ions. He also designed and developed a type of strengthened energy absorber for cars using a novel surface nanocrystallisation technology.

Commenting on his election as an NATF Fellow, Professor Lu said, “I am most delighted and proud to be elected, since all NATF Fellows are outstanding scholars in their own right or renowned experts in different science and technology fields, and I am the first NATF Fellow of Chinese origin ever elected.”

Professor Way Kuo, President of CityU, congratulated Professor Lu for reaching this academic pinnacle. “It is a great honour for CityU to have another prestigious academic member on our faculty,” he said.

Last year, Professor Lu founded the Centre for Advanced Structural Materials at CityU to conduct research into innovative materials such as structural materials of ultra-strength and ductility. These materials can be applied in vehicles for transportation to reduce their weight and fuel consumption.

For his distinguished accomplishments, Professor Lu has been presented with numerous awards including the French Knight Order of National Merit and the Gold Medal with Mention in the 56th World Exhibition of Innovation, Research and New Technologies at the Brussels Expo.

Professor Lu is also a Fellow of the Society for Experimental Mechanics in the US, an Overseas Assessor of the Chinese Academy of Sciences, and was a Member of the International Experts Group of the Chinese Ministry of Science and Technology.

Evolved from the Council for Applications of the French Academy of Science (CADAS), established in 1666, NATF is a public establishment founded in 2000. It reports to the Minister for Higher Education and Research in France.

Fellows of NATF strive to analyse the major challenges confronting mankind and propose solutions to meet them. NATF has 265 Fellows, including Professor Jean-Marie Lehn, Nobel Laureate in Chemistry; Professor Albert Fert, Nobel Laureate in Physics; Professor Pierre-Louis Lions, winner of the Fields Medal (The International Medal for Outstanding Discoveries in Mathematics); Professor Joseph Sifakis, winner of the Turing Award; Professor Jean-Lou Chameau, President of the California Institute of Technology in the US; and Professor Alice Dautry, Director General of the Pasteur Institute (Institut Pasteur), a world-renowned research organisation in France.

Professor Lu and the other eight newly elected Fellows were welcomed at an inception ceremony at NATF Headquarters in the Great Palace (Grand Palais des Champs Elysées) in France on 30 January.