Hong Kong’s GDP is expected to grow 4.3% in 2012 with growth coming mainly from domestic demand and services exports (particularly travel services), according to City University of Hong Kong (CityU) forecast. Due to the economic slowdown around the world, Hong Kong’s GDP growth this year is likely to be 0.9 percentage point lower than last year.

The overall inflation rate this year will be 4.6%, a drop of 0.7 percentage point over last year. The forecast data have been submitted to the United Nations for the latest version of its publication World Economic Outlook. 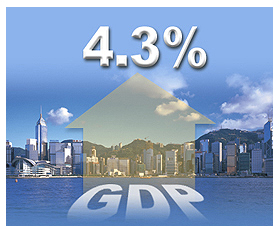 The above projection is based on the CityU-UN Forecasting Model of the Hong Kong Economy (CityU-UN HK Model), formulated under the United Nations Project LINK. Led by Professor Chou Win-lin of CityU’s Department of Economics and Finance, the CityU-UN HK Model is the largest research project of its kind in Hong Kong with more than 20 years of history.

“Based on the Model, Hong Kong’s GDP will increase by only 4.3% in 2012 due to sluggishness in the world economy. The growth will not come from export trading; it will be attributable more to domestic demand (particularly consumer spending) and services exports,” Professor Chou said.

Exports of goods and services constitute a major component of GDP, with entrepot trade carrying the highest weight of 98.2%. Due to weakening market demand, entrepot trade will go up by only 2.7% in 2012. “According to the CityU-UN HK Model, total exports (including exports of goods and services, in real terms) will rise only 3.2% because of the sluggish market demand,” Professor Chou said.

Projected growth rates for other components of Hong Kong’s GDP are 4.1% for imports of goods and services and 5.4% for local investment.

“The pressure of inflation will decline this year as many countries around the world will continue implementation of austerity measures which will curb prices of crude oil and raw materials,” Professor Chou said. “Apart from the change in prices of imported goods, impact of prices of exported services on inflation should not be overlooked.” Based on the CityU-UN HK Model, the inflation rate is forecast to be 5.3% in 2011 and around 4.6% in 2012.

Research for formulation and implementation of the CityU-UN HK Model (formerly called Hong Kong LINK Model) is funded by CityU’s Research Centre for International Economics. Comparison of forecasts of local GDP based upon the Hong Kong LINK Model with actual performance in the past decade (2001-2010) shows its outstanding efficacy in terms of accuracy (detailed data can be referred to on webpage of CityU’s Department of Economics and Finance: www.cb.cityu.edu.hk/EF/research).