One of the world’s most distinguished sociologists and social thinkers treated an audience of students and academics at City University of Hong Kong (CityU) to an eclectic and at times polemic discussion on the perceived need and viable prospects for a global civil religion or society. 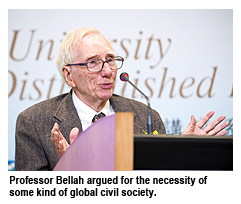 Professor Robert N Bellah, Elliott Professor of Sociology Emeritus at the University of California at Berkeley, speaking on 12 December at the last CityU Distinguished Lecture of the calendar year, reflected on the political, economic and spiritual dimensions of creating a viable and coherent transnational world order.

With recourse to his own writings and those of other contemporary philosophers, he argued that for the creation of such a global structure, a world civil society is an essential precondition, and would require a religious dimension and a legal and an ethical framework, as well as some form of institutional backing.

While some commentators have claimed that the possibility of a single, unified global tribe is not feasible for humanity, Professor Bellah asserted, citing as a foil to his own position Michael Walzer’s book Thick and Thin: Moral Argument at Home and Abroad which can be read as a rebuff to the concept of a global civil society, that a global culture of sorts exists, exemplified by sporting events such as the FIFA World Cup and the Olympics.

In addition, global laws were already applied to world business and economy, hinting of the possibility of the creation of a more globally oriented community characterised by mutual support and interdependence.

“Our global economy would be impossible were there not a plethora of rules, some legal, some customary, governing global trade and capital transfers,” said Professor Bellah, whose latest book Religion in Human Evolution: From the Paleolithic to the Axial Age published in September 2011 represents the culmination of his lifetime interest in the evolution of religion.

“While we have no world state, and wouldn’t want one, the beginning of world governance, which is not the same thing as a world state, we certainly have,” he said.

In his talk, Professor Bellah was highly critical of the way today’s unrestrained neoliberal economic policies and ideology had advantaged the few and disadvantaged the many, creating the worst possible conditions for a more selfless and visionary world society.

His scathing assessment of the deregulated markets that took root in the early 1980s in some Western countries emphasised how world markets were not controlled by anyone but certainly controlled us.

As a counter-argument to a neo-liberal free marketeer’s position, he made special mention of the post-World War Two economy in the US that achieved regular growth and avoided recessions despite a plethora of checks and balances imposed by government.

Thus it was Mammon, Professor Bellah noted wryly, that some might argue could represent the furnishings of a global civil religion, a prospect the eminent sociologist said would have untrammelled negative consequences for the entire planet.

“World politics needs to catch up with the world economy so that an effective structure of regulation can be created that will protect the environment and the vulnerable of the earth who are paying the price while only a few are reaping the benefits,” he argued.

While there was no pat answer offered in response to the title of the talk—“Can We Imagine a Global Civil Religion?”—it was Professor Bellah’s view that the world needed to draw ideas and inspiration from aspects of the totality of the world’s spiritual faiths.

“I am convinced that religious motivation is a necessary factor if we are to transform the growing moral consensus and the significant beginnings of world law into an effective form of global solidarity and global governance in relation to an actual existing global civil society with a spiritual dimension drawn from all there great religions of the world,” he concluded. 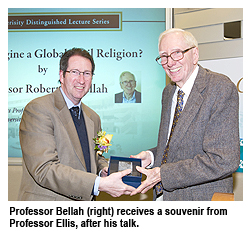 Professor Arthur Ellis, Provost, in his introduction to Professor Bellah, said Professor Bellah’s talk was “timely”, highlighting the need to tackle climate change and carbon emissions. “There is an increasing sense that the world is globally interdependent and we need to rely upon one another and work together,” he said.

The Distinguished Lecture Series allows CityU to bring together renowned scholars from across the spectrum of academic disciplines and scholarly pursuits, contributing to CityU’s theme of discovery and innovation, Professor Ellis continued.

Among Professor Bellah’s many publications is Habits of the Heart: Individualism and Commitment in American Life published by the University of California Press in 1985, and he received the United States National Humanities Medal in 2000.

Professor Bellah’s visit coincided with a conference titled “Confucianism: A Habit of the Heart”, organised by the Department of Public and Social Administration from 13 to 14 December on the resurgence of Confucianism across East Asia with a focus on the various ways in which it functions as a source and justification for common values and collective identity.