The fifth meeting of the Court of City University of Hong Kong (CityU) reflected on key achievements that have reinforced the University’s commitment to excelling in research and professional education, and received reports on preparations for the implementation of the new 4-year curriculum in 2012. 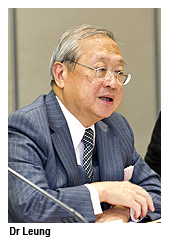 CityU had surged 19 places to 110th in the world, and had maintained its position as the 15th top university in Asia, Dr Leung said, clear evidence that CityU was successful in pursuing its mission to become an internationally respected seat of higher learning.

Dr Leung also drew attention to the Council’s endorsement of the plan for establishing the School of Veterinary Medicine and the continued support from alumni and the general public in terms of donations.

Much of the recent success of the University could be attributed to the guidance offered by Mr Leung Chun-ying, former Chairman of CityU’s Council, Dr Leung said, citing Mr Leung’s leadership in determining CityU’s strategic direction, exemplified by the creation of forward-thinking institutions such as CityU’s School of Energy and Environment and the Social Responsibility Charter. 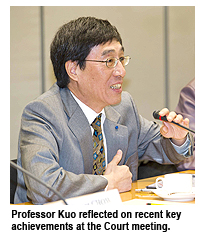 In his report to the Court, Professor Way Kuo, President, outlined the preparations for the start of the new 4-year undergraduate degree structure, highlighting CityU’s achievement in securing funding from the government for new programmes and extra bed spaces for student hostel accommodation, plus strategies for rewarding and retaining high-calibre staff.

Mr Raymond Or Ching-fai, Acting Chairman of the Council, noted that the University was well prepared for the challenge of the new 4-year curriculum, stating that the University was committed to ensuring that the quality of teaching, academic planning, learning environment, and facilities would be enhanced to support the arrival of the double cohort of students onto campus in 2012. 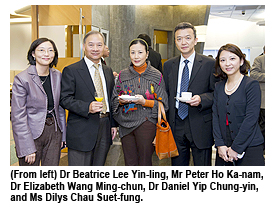 Regular reports on the progress of capital projects underway on campus and the progress of the School of Veterinary Medicine had been requested by the Council, Mr Or said, while staff related policies such as the new code of conduct and procedures to handle grievances and sexual harassment were in place to boost collegiality.

On a final note, Mr Or emphasised the importance of corporate social responsibility in enhancing CityU’s educational ambience, making special mention of the conservation awareness project at Ma Wan Park Noah’s Ark, the campus-wide movement to encourage less food waste, and measures to achieve a low carbon campus as examples of a more environmentally friendly mentality and efforts that contribute to sustainability.