More than 350 colleagues attended two Town Hall Meetings at City University of Hong Kong (CityU) on 8 December to further exchange views on a new pay scheme for employees of the university. 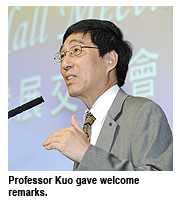 Professor Way Kuo, President, welcomed colleagues for attending the meetings while Mr Herman Hu Shao-ming, a member of the University Council and Chairman of the Human Resources Committee (HRC) under the Council, introduced the background of the Performance-based Pay Review (PBPR) Scheme at both the English and Cantonese language meetings.

“CityU is a great university. Our staff are our most valuable assets,” Mr. Hu said. “We felt we need to provide better incentive to recruit, motivate, retain and reward top level academic and non-academic staff by introducing the new PBPR Scheme.” 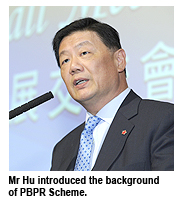 As a consequence, an additional funding of $12 million will be allocated by the University to implement this new scheme.

“We have adopted a bottom-up approach for identifying criteria and standards for assessment which were subsequently approved by the Central Committee of the University,” said Ms Helen Leung Lai-wa, Director of Human Resources.

“Under the new scheme, colleagues at the top point (about 52%) previously not eligible for pay raise will now have the opportunity to receive pay review based on performance,” she added. “In addition, the maximum and minimum values of the salary bands, which replace the old salary scales, will be raised by 5% and 2.9%, respectively,” Ms Leung explained. 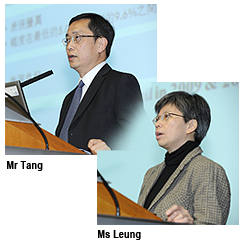 “The salary bands will be reviewed on an annual basis and adjusted to reflect market rates, salary structures in sister institutions, and funding available to the University,” said Ms Leung, adding that for those staff at the top of their scale, the portion of the pay increase exceeding the raised salary bands will be rewarded in the form of an allowance.

According to the preliminary outcome of the performance ratings, over 85% of the colleagues fall into the outstanding and good categories.

Mr Simon Tang Siu-kee, Director of Finance, presented the pay review factors and compared the new PBPR Scheme with CityU’s former pay raise system. “We take into consideration market pay trends and expectation, general economic conditions and the financial situation of the University in determining the pay increase,” he said. 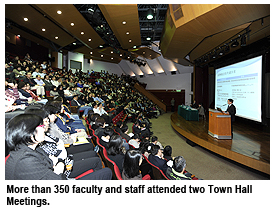 In addition to the Town Hall Meetings, the University has been collecting questions and feedback from different stakeholders for the purpose of future refinement of the scheme. The Human Resources Office (HRO) will be compiling all the questions they have collected in the next few weeks and these will be uploaded on the HRO website together with the responses.

The Town Hall Meetings were moderated by Professor Matthew Lee Kwok-on, Director of Communications and Public Relations. A strong note of appreciation was offered to colleagues in the HRO for their efficient support to the entire exercise.