The abolition of capital punishment in Asia was the focus of an international conference on “Capital Punishment in Asia: Progress and Prospect for Law Reform” organised by the School of Law of City University of Hong Kong (CityU). 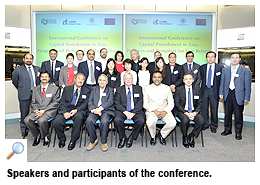 The conference was held in collaboration with Jindal Global Law School and the Office of the European Union to Hong Kong and Macau on 4 and 5 November at CityU.

Developments aimed at the progressive abolition of the death penalty were debated, as were the possibilities of further law reform in Asia, especially in mainland China, India, Japan, South Korea, Taiwan, Singapore, and Malaysia. 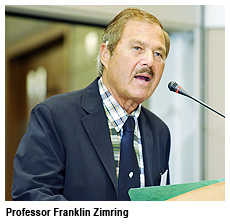 In his keynote address, Professor Zimring, co-author of the book The Next Frontier: National Development, Political Change, and the Death Penalty in Asia, pointed out that Asia is not unique when it comes to the abolition of capital punishment and suggested a two-step campaign to help lessen the number of state executions in Asia. The first is a regional NGO that collects and spreads information, and the second a campaign to secure a commitment against the use of executions as a tool against political crime, thus removing the type of state killing. That campaign played a prominent role in East Asia during the 20th century. 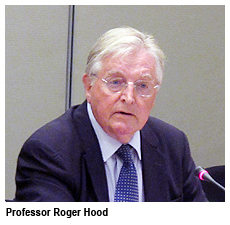 In his concluding address, Professor Hood drew together broad findings in the context of Asian countries against the backdrop of international trends. He was recently honoured with the Cesare Beccaria Medal from the International Society of Social Defence and Humane Criminal Policy in recognition of his “dedication to the abolition of the death penalty worldwide”.

Dr Surya Deva, Associate Professor of the School of Law at CityU, said the conference was only the beginning and that further initiatives in the form of research, publications, conferences, and advocacy campaigns would help push for the ultimate abolition of capital punishment in Asia. Dr Deva convened the conference with Professor Hood.

Professor Arthur Ellis, Provost of CityU, noted in his speech that capital punishment was an important issue for Asia. “Hong Kong is the right place to bring together scholars, practitioners and NGOs to assess progress, critically examine policies, and make suggestions for reforms in order to restrict and eventually abolish the death penalty worldwide,” he said.

On behalf of CityU’s School of Law, Professor Anton Cooray, Associate Dean, thanked the participants for their contributions to exploring various dimensions of the conference theme.

The conference concluded that law reform in Asia can help restrict the use of the death penalty by legislative and judicial means, align capital punishment with the obligations flowing from Article 6 of the International Covenant on Civil and Political Rights and the United Nations Safeguards Guaranteeing the Rights of those Facing the Death Penalty, move towards a moratorium on all executions, and remove capital punishment from the statute books.