A new programme aimed at broadening students’ internationalisation perspectives will be funded to the tune of HK$50 million.

The announcement was made by Professor Way Kuo, President of City University of Hong Kong (CityU), at the 16th annual CityU Banquet on 27 October.

The Student Internationalisation Programme has already raised HK$25 million. It will sponsor overseas exchanges and internships for an extra 200 students each year for the next three years. The University will continue efforts to raise funds to benefit more students.

About 2,000 students filled 180 tables at this year’s dinner party. As Halloween was approaching, some student performers donned spooky costumes for the rope skipping, dancing, singing and magic shows. The climax of the evening came when Professor Kuo sang “Listening to the Sea” and, as an encore, “Chrysanthemum Podium”. 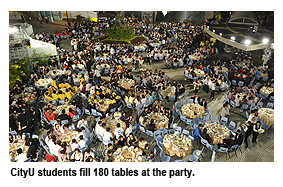 At the start of the party, Dr Norman Leung Nai-pang, University Pro-Chancellor, recalled his first Banquet, in 1995. That was the year CityU won university status. He said he was pleased to see the number of students joining the function growing year by year and to witness CityU’s development, advancing to 110th place in international university rankings published by Quacquarelli Symonds this year.

In his speech, Professor Kuo highlighted that, just like last year, the banquet menu had been reduced from eight to six dishes in response to the University’s call for reducing food waste and promoting environmental protection. He added that the theme of research and teaching for the University this year is discovery and innovation as part of the Strategic Plan for 2010–2015.

Oliver Liu Yizhou, Acting President of the Students’ Union, said he was delighted by the success of the banquet and the increasingly internationalised atmosphere on campus.