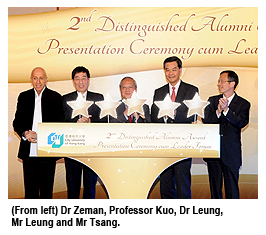 Mr Tsang and Dr Zeman discussed the successful aspects of leadership with a 160-strong audience at a forum after the ceremony.

“I am grateful to CityU for nurturing me, helping me to start my career, and providing opportunities for me to take part in the University’s development and committees,” Ms Chau said. “The award is a great honour for me and highly encouraging.” 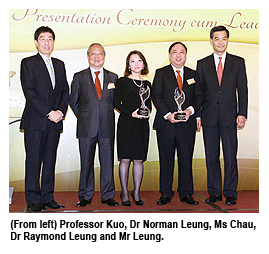 Ms Chau has worked for Ernst & Young once graduating from the Bachelor of Arts (Honours) in Accountancy programme in 1992. She has solid experience in assurance and advisory business services and has a number of professional qualifications. She has been promoting the development of the accounting industry by participating in the affairs of the Association of Chartered Certified Accountants (ACCA) Hong Kong. She was President of ACCA Hong Kong in 2006-07, committed to promoting training in accounting.

Despite her busy schedule, Ms Chau participates regularly in public affairs. In addition to her role as Honorary Treasurer of the Hong Chi Association, she is a member serving on many government advisory committees. She has been participating actively in the University’s development as a Member of both the CityU Court and the Advisory Committee of the School of Continuing and Professional Education, and as Honorary Treasurer of the CityU Eminence Society and as a former Member of CityU Council.

Mr Hui, Director and Group General Manager of Chinachem Group, is an outstanding leader in the business sector. He completed his Masters of Laws (Chinese and Comparative Law) at CityU in 2001. Since then, he has participated in alumni affairs and the University’s development. He is the Founding Chairman of the Alumni Association of the School of Law, a Member of the Provisional Standing Committee of the Convocation, and a Founding and Life Member of the CityU Eminence Society.

Mr Hui has raised a significant number of donations from alumni by organising CityU’s Alumni Giving Club, and serving as Co-chairman of the Alumni Donations Committee. 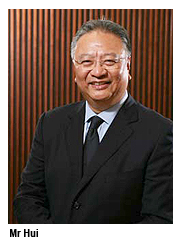 As an experienced leader in the business sector and society, he has helped develop ideas and strategies for the University over a number of years. He is a Member of the CityU Court and has been an Honorary Advisor in the President’s Circle, providing the University with his professional advices.

Mr Hui is also committed to promoting basketball, having set up sports scholarships for CityU’s basketball team players in recognition of their outstanding performance.

“I not only acquired knowledge at CityU, I also gained many good memories. Although my time here was short, my affection for the University has grown over time,” Mr Hui said. “Therefore, apart from concerning myself with social affairs, I also support the development of the University.” In 2009, CityU conferred Mr Hui with an Honorary Fellowship in recognition of his contributions to the University and society.

Dr Leung is a successful industrialist and a role model for life-long learning. He finished his Engineering Doctorate (Engineering Management) Degree at CityU in 2009.

His experience and connections in industry have contributed to the University’s long-term development. He is an Honorary Advisor in the President’s Circle, a Patron of the CityU Business and Industrial Club, and Vice-Chairman of the CityU Eminence Society. He was conferred as a Distinguished Fellow and an Honorary Fellow in 2006 and 2010, respectively, for his contributions to the University and the industry.

“CityU will flourish through the support of the alumni, and I will continue to support CityU’s development,” he said.

The biennial Distinguished Alumni Award, established in 2009 during the University’s silver jubilee celebration, recognises and honours the achievements and contribution of CityU’s alumni.