The first session was conducted in English on 16 June and the second in Chinese on 17 June. More than 400 members of staff attended the events. 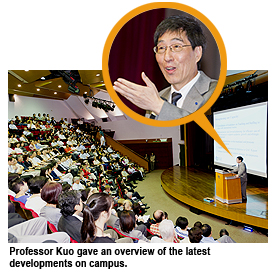 Professor Way Kuo, University President, started by giving an overview of the changing higher education landscape in Hong Kong and outlining the key areas for strategic investment identified in CityU’s Strategic Plan 2010-2015 in response to these changes and challenges among which resources, accountability, modernisation are some key ones that CityU needs to work hard on.

“Our Academic Development Proposal (ADP) for 2012-2015 follows on from the strategic plan. It is student-oriented and nurtures a new generation of professionals through a discovery-enriched curriculum,” he said. “We will strengthen our capacity in teaching and research to develop new areas of professional education and expand our students’ career opportunities.”

He added: “We are also very encouraged by the University Grants Committee’s (UGC) positive comments about our ADP: that CityU’s teaching and learning are developing well, … are heading in the right direction and have the potential to produce good results.”

Other highlighted achievements included the progress made in improving campus space with the construction of four more buildings, the record-breaking donations raised this year, and the strong commendations by the Quality Assurance Council of UGC in the 2010 Quality Audit Report.

Professor Kuo announced that there will be a pay increase for CityU staff effective from 1 April 2011, and also a proposed pay increase in January 2012, “subject to Council approval”. He further pointed out that the Performance-based Pay Review (PBPR) scheme, which links reward to performance, will require more than the supplementary funding received from the government, and that the University will provide top-up funding for rewarding staff. 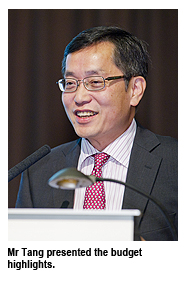 Professor Kuo also reported on the progress of the proposed School of Veterinary Medicine. Animal related human diseases have battered many countries and claimed many lives, he said. “A veterinary school of medicine is not just for cats and dogs but also for protecting the health and wealth of human beings,” he explained. “Our plan is to establish a veterinary school on a self-financed model following the rules of UGC. We have received strong support from the community. The Council’s Executive Committee has asked the University to continue exploration in this direction.”

Mr Simon Tang Siu-kee, Director of Finance, then presented the budget highlights and the general pay adjustment. He also pointed out that the staffing budget will be downloaded directly to departments.

In the Q&A, Mr Wong Ka-yu, Director of Campus Development and Facilities Office, answered a question from the audience about CityU’s expenditure on energy consumption. Despite an increase in activities, CityU is maintaining more or less the same energy expenditure as in recent years, he said.

In response to questions on the pay adjustment and staffing issues, Professor Kuo emphasised that the University would give every dollar from the government to staff but the distribution would vary. In fact, CityU would put more into salary adjustment than what the government provides. “For staff who excel, we will give them more as a reward. We will not consider layoffs, though we are growing fast,” he said.

A set of Q&As addressing concerns raised by colleagues regarding the PBPR will be uploaded to the University website.