About 40 new student leaders at City University of Hong Kong (CityU) pledged to serve their fellow students, the community and humanity at the 26th Students’ Union inauguration ceremony on 13 June. 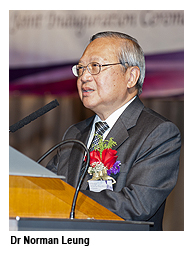 “At university, you must seize the opportunity to develop a logical, analytical and independent mind,” said Dr Leung in his opening address. He also urged students to ask questions and learn to respect other people’s opinions. 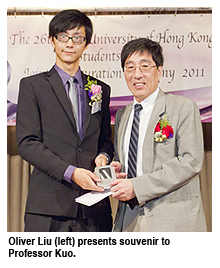 Professor Kuo asked the new leaders to be team players. “The most important thing is, if you are not a team player, people will not think highly of you. If you are a team player, you will be recognised throughout your life,” he said.

Under the supervision of Professor Lam, four leaders from the Students’ Union Executive Committee, Union Council, Arbitration Committee, and Editorial Board led committee members in the oath-taking service, witnessed by leaders of student societies and student representatives from other higher education institutions in Hong Kong.

“As leaders, we try new solutions, we take on responsibilities, and we overcome problems,” said Oliver Liu Yizhou, Acting President of the Students’ Union, in his address. “In the meantime, we must bear in mind that as ‘student’ leaders, we also have to learn and grow.” 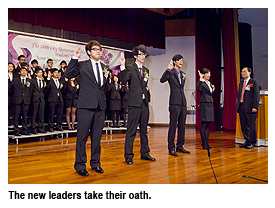 The symbol for this year’s Students’ Union is the “Love Knot”, four same-sized loops tied to the center of the knot to represent the four main bodies under the Students’ Union.

“We have all gone through ups and downs, and experienced both happiness and sorrow,” said Nicky Wong Chun-kin, External Vice President of the 25th Students’ Union. He said he had learned a lot during his year-long service and made many firm friends.