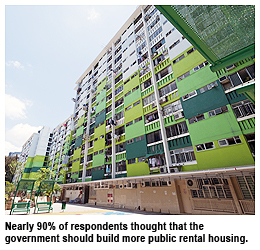 As part of a larger research project on the future of public rental housing in Hong Kong, the CityU research team, led by Professor Ray Forrest and Dr Yip Ngai-ming of the Department of Public and Social Administration, interviewed some 3000 individuals in November and December 2010. Highlights of the results are as follows:

The research project, funded by a grant from the Central Policy Unit of the Government of Hong Kong Special Administrative Region and the Research Grants Council, is designed to investigate the changing social role of the public rental housing sector in Hong Kong. Its primary aim is to anticipate new challenges which may lie ahead for policymakers and to explore potential policy options.

All interviews were conducted over the telephone. Of the 3013 interviews, 2002 were with current public housing tenants. The remainder of the sample breaks down as follows: 72 Tenant Purchase Scheme, 210 Home Ownership Scheme, 583 Private owners, 139 Private renters and 7 others.