Winning the Eight-corner Cup this year was the perfect birthday present for the Putonghua debating team at City University of Hong Kong (CityU).

“It is particularly meaningful because it’s the first time we have won this honour and because it is our 10th anniversary,” said Jiang Weixuan, a Year 3 student in the Department of Electronic Engineering who, in addition to being the former chairman of the Putonghua Debating Society, coached this year’s successful squad. 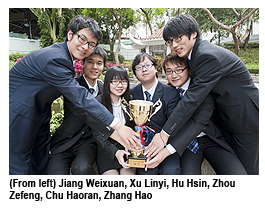 The CityU debaters outperformed their opponents from the Hong Kong University of Science and Technology in the final of the competition on 2 April after completing five debates against other local tertiary institutions.

The team members were highly commended by all the judges for their thoughtful contributions and conscientious performances.

Zhou Zefeng claimed the Best Debater awards in the final and semi-finals; Chu Haoran and Hu Hsin received the same award during earlier rounds. A total of 13 students represented CityU during the whole nine-week competition.

The competition was intense throughout. The topics were not released until a week before each round, leaving teams a limited amount of preparation time. The additional difficulty for the CityU debaters was that the topics were usually related to local Hong Kong issues. As the CityU team comprised students drawn mainly from the mainland or Taiwan, the team spent four to five hours a day on research and discussion.

However, everyone agreed the process has given them a better understanding of Hong Kong, a deeper sense of belonging to CityU, and essential transferable skills.

“Debates require a clear mind and help me to improve my critical thinking and presentation skills, which will be very useful for job interviews in the future,” Xu Linyi said.

“To win a debate you need to target your opponents’ weak points and strengthen your arguments, so debating enhances our logical thinking and communication skills,” Zhou Zefeng added. 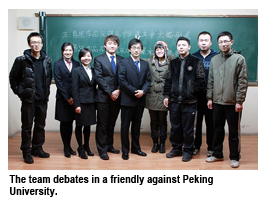 In terms of preparation, the team organised friendlies against Peking University and Putra University in Malaysia, and invited award-winning debaters from Chinese-speaking communities to CityU.

Zhang Hao, a Year 2 student in the Department of Computer Science, and the current chairman of the CityU Putonghua Debating Society, said they will try to join more overseas competitions in the future and promote Putonghua debating on campus through activities such as inter-hall competitions.