A highly specialised programme that provides senior judges from mainland China with a greater understanding of common law and international law drew to a close at a ceremony at City University of Hong Kong (CityU) on 19 April.

Thirty-four senior judges participated on the Advanced Programme for Chinese Senior Judges from 11 to 19 April, including vice-presidents of China’s High People’s Courts, and presidents and vice-presidents of China’s Intermediate People’s Courts from various provinces and cities. Those selected to join the programme are typically involved in settling legal cases related to overseas, Hong Kong and Macau issues. 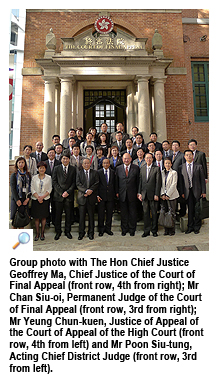 The programme has been organised by CityU’s School of Law in collaboration with the National Judges College and the Supreme People’s Court of the People’s Republic of China for the last three years.

During the programme, the participants attended intensive courses on common law and the core philosophy of international law. In addition, they visited local judiciary organisations and other legal institutions, such as different levels of Hong Kong courts, The Commissioner’s Office of China’s Foreign Ministry in Hong Kong SAR, The Law Society of Hong Kong, Hong Kong Securities and Futures Commission, and the ICAC. They met Hong Kong legal professionals such as the Hon Chief Justice Geoffrey Ma, Chief Justice of the Court of Final Appeal; attended roundtable discussions held by the Centre for Chinese and Comparative Law and the Hong Kong Centre for Maritime and Transportation Law, CityU; and joined a seminar co-organised by The Law Society of Hong Kong. Four participants gave talks to and exchanged views with local legal professionals.

Guest speakers during the programme included Dr Tian Lixiao, Director-General, Department of Treaties and Law, Office of the Commissioner of the Ministry of Foreign Affairs of China in the HKSAR; Mr Yeung Chun Kuen, Justice of Appeal, Court of Appeal of the High Court; Professor Timothy Endicott, Dean of the Faculty of Law, University of Oxford; Mr Andrew Liao, SC, Member of the International Advisory Board, SLW, CityU; and Dr Priscilla Leung Mei-fun, Associate Professor of SLW, CityU, and Chairman of the Hong Kong SAR Basic Law Education Association. 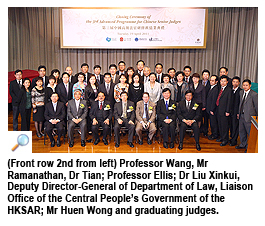 Dr Liu Xinkui, Deputy Director-General of Department of Law of the Liaison Office of the Central People’s Government of the HKSAR; Mr Huen Wong, JP, President of the Law Society of Hong Kong, Mr Kumar Ramanathan, SC, Chairman of the Hong Kong Bar Association, and Professor Arthur Ellis, Provost of CityU, officiated at the closing ceremony.

“As mainland China, Hong Kong and different countries hold different interpretations and viewpoints about legal systems, the platform provided by the Advanced Programme for Chinese Senior Judges facilitates their comprehension of different legal issues, as well as consolidating the equities and benefits of different parties. SLW is glad to have jointly organised the programme with the National Judges College of the Supreme People’s Court of the People’s Republic of China for the last three years. Over 30 Chinese senior judges exchange their legal knowledge with Hong Kong professionals during the programme, which has gained recognition from professional bodies in both mainland and Hong Kong. We welcome the senior judges to visit us again, and maintain our connection in legal and judicial exchange,” said Professor Wang Guiguo, Dean of SLW.

Mr Xu Chunjian, Representative of the 3rd Advanced Programme for Chinese Senior Judges and Vice-President of Guangdong High People’s Court, said he was grateful to the organisers of the programme. “We sincerely thank the National Judges College and CityU for offering us a precious experience to understand more about the judiciary system under the philosophy of ‘One country, two systems’ and the essence of different judiciary systems. We treasured the opportunity to discussing issues of common concerns with local legal and judicial professionals,” he said.