Consumer satisfaction with housing and related products and services in Hong Kong remains the lowest of the daily life categories assessed in a survey conducted by the Department of Management Sciences at City University of Hong Kong (CityU).

The CityU–Hong Kong Consumer Satisfaction Index (CityU–HKCSI), an example of the University’s community-oriented research, assesses the quality of local products and services and is intended as an indicator of business performance in Hong Kong.

The index uses a scale of 0 to 100 to represent consumer satisfaction with 68 products and services, which are divided into six categories: Clothing & Personal Care; Food & Drinks; Housing & Related Items; Transport; Information & Entertainment; and Non-Consumer Price Index (Non-CPI) Items. These categories account for more than 75% of products, by assigned weight, in the Hong Kong composite Consumer Price Index. 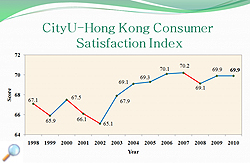 “Consumer sentiment is affected by people’s confidence in the economy. The Hong Kong economy has remained stable for the past two years and so overall consumer satisfaction has not changed,” said Dr Geoffrey Tso Kwok-fai, Associate Professor in the Department of Management Sciences.

“Low satisfaction levels with housing and related products and services are probably due to high rents in the private housing sector,” he added.

Of the 68 individual goods and services covered in the index, consumers were most satisfied with music CDs (80.7), postal service (79.3), refrigerators (79.0), broadcasting/radio stations (77.9) and motor vehicles (77.8). Music CDs have occupied one of the top two positions since 2005.

The lowest satisfaction levels were reported for job-seeking magazines (61.2), shopping in Shenzhen (61.7), tunnels (64.0) and internet service providers and real estate agents (64.9). Job-seeking websites were written off from the worst 10 performers’ list due to a noticeable increase of 3.1% in satisfaction levels last year.

CityU has been measuring consumer satisfaction for over a decade, offering a valuable reference for the business sector, particularly for those providing consumer goods and services.

To compile the data for the index, more than 170,000 computer-assisted telephone interviews have been conducted since 1997. For the 2010 survey, 13,152 interviews were carried out from 29 June to 8 August last year.