The sometimes radically dissimilar views held by different societies on what it means to be human fell under the spotlight at the latest City University Distinguished Lecture when one of the world’s pre-eminent thinkers led a packed auditorium on an intellectually rich review of alternative proposals on the nature of existence. 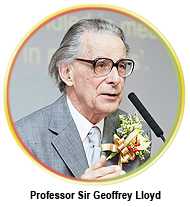 Professor Sir Geoffrey Lloyd, Emeritus Professor of Ancient Philosophy and Science, University of Cambridge and Senior Scholar in Residence, Needham Research Institute, took as his starting point in his talk on 20 January an essay by his mentor Professor Jean-Pierre Vernant who argued that for the ancient Greeks what it means to be human is defined by a triadic relationship in which humans are sandwiched between the gods and other animals.

This notion gave rise to the title of Sir Geoffrey’s lecture, “Humanity between gods and beasts? Ontologies in question” and he developed the point by raising several questions.

“How did, how do, other societies get on with the business of defining what it is to be human and what assumptions do they make on that score? Does being human arise as a problem or is the concern not with other animals versus us but between different human beings, between us and others, outsiders, strangers, enemies, who may or may not be humans exactly like you?” he asked.

His analysis on alternative ontologies drew on contemporary anthropology studies through the work of Professor Viveiros de Castro and Professor Philippe Descola, the writings of classical European philosophers such as Pythagoras, Empedocles, Plato, Aristotle and early Christian thinkers and ancient Chinese thinkers such as as Xunzi and Lüshi Chunqiu.

The discussion revealed that faculties such as language and the capacity for reason have not succeeded in differentiating what it means to be a human as opposed to be another animal, since this ongoing debate stretches back to antiquity and shows no sign of resolution anytime soon. In addition, given the diversity among and of different societies on what is considered right and wrong, a sense of morality also fails to define us, not only from animals but even from each other.

The plurality of ontologies, from the ancient Greeks and Chinese through to present-day explorations of indigenous groups in South American, courtesy of anthropologists such as Professor Viveiros de Castro, suggests that within our one world—the universe—there are worlds within worlds all competing for a degree of acceptance.

One of the most interesting examples given by Sir Geoffrey of these often conflicting ontologies is reflected in the radically divergent ways we view inanimate objects. For instance, the early Jesuits found on their first encounters with the Chinese more than 400 years ago that whereas Western classical thinking regarded “fire” as an element, the Chinese saw it “as a process” or phase, suggesting a quite different way of viewing the world.

Sir Geoffrey suggested in his closing comments that, given the multiplicity of view on the definition of humanity and how we understand our place in the general scheme of the universe, the imperative is to embrace plurality and diversity in every facet of human existence, and exploit the cross-disciplinary knowledge gleaned from cultural studies, philosophy, history and science, among others, in order to advance self- and mutual understanding. 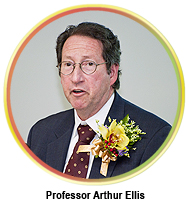 “We anticipate that the institute will bring together scholars from many different fields to nucleate a host of emerging opportunities for research and teaching,” Professor Ellis said. Inter- and cross-disciplinary will form a significant part of the next Academic Development Proposal, too, he added.

Sir Geoffrey is the author of some twenty books, and many articles, on the history of science. His intellectual career began with the study of Greek science, especially medicine and mathematics. His first nine books explore the relations of Greek science to philosophy, religion, popular practices, and its grounding in the diverse cultures of the ancient Mediterranean. In the 1990s his interests turned to the history of science in China, including the study of Classical Chinese.

No stranger to CityU, Sir Geoffrey gave the keynote address at the four-day Matteo Ricci conference in October 2001 which was co-hosted with Peking University.