The second in a series of specially commissioned lectures at City University of Hong Kong (CityU) celebrating the work of the University’s top academics focused on wireless power transfer. 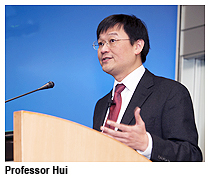 In a lively, hands-on lecture Professor Ron Hui Shu-yuen, Chair Professor of Electronic Engineering at CityU, traced the historical development of wireless power transfer and explained the basic principles, challenges, milestones and modern applications of the technology at the President’s Lecture Series: Excellence in Academia on 17 January.

A world pioneer in the field, Professor Hui had two very clear messages: one, that CityU researchers are playing a key role in underpinning the dimensions of an internationally accepted standard for wireless power transfer, and two, that this area of electronic engineering is vital if we are to combat e-waste and further reduce the standby power of battery charging systems.

During the lecture, he demonstrated how he and his team at CityU had developed the technology for charging electronic devices that is used in the world’s first Qi-certified wireless charging system via CityU’s industrial partners. Qi is the name given to the standard by a business alliance of around 70 international firms called the Wireless Power Consortium dedicated to standardising wireless charging. In Chinese, Qi means “life force”. 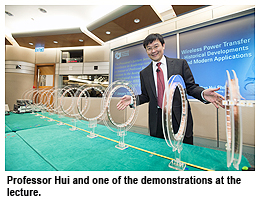 The technology developed at CityU is used in a charger that enables “free positioning” of an electronic device on the charging platform, a “localised charging” capability, meaning the charger can be used for several devices, and an in-built mechanism that identifies and monitors different loads. For instance, to illustrate the latter, Professor Hui demonstrated how the charger can differentiate between a mobile phone and a wallet (in this case that of Professor Way Kuo, University President, who “volunteered” his wallet during the demonstration) containing objects that store electronic data, such as identity cards, credit cards or travel cards.

One of the concerns of wireless power transfer is that personal data might be compromised but Professor Hui successfully demonstrated that his charging device would ignore the wallet and its contents and simply charge the mobile phone when both were placed on the platform.

He also showed that you could receive calls from your mobile phone while it is being charged with the help of two members of the audience—Ms Connie Lau Yin-hing, Chief Executive, Hong Kong Consumer Council, and Dr Christine Loh Kung-wai, CEO of the independent, non-profit public policy think tank, Civic Exchange—who managed to chat over a mobile phone being charged. 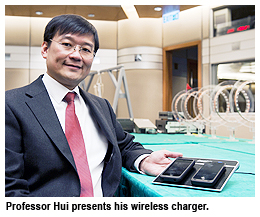 The environmental message behind Professor Hui’s work was powerfully conveyed when he informed the audience that three countries—China, India and Nigeria—are dumping grounds for e-waste, especially waste created by items such as mobile phone chargers, which quickly become redundant when users upgrade their devices. In addition, two related photos—one of a tangle of wires for electronic devices and the other of several devices on a single platform—produced a powerful impact.

“A common wireless charging protocol can lead to a drastic reduction in e-waste,” Professor Hui said.

The green aspect of Professor Hui’s work ties in with his role in Hong Kong as a prominent member of the Consumer Council, part of his public service. Professor Kuo, in his opening address, stressed that Professor Hui proved what an academic can achieve.

“As a teacher, he has nurtured and inspired his students, winning the Teaching Excellence Award in 1998, and as a researcher, his work contributes to the core technologies for the world's first international wireless battery charging standard, which was launched in 2010,” Professor Kuo said.

Professor Kuo highlighted Professor Hui’s recent achievements, too. “He was recently elected to the Australian Academy of Technological Sciences and Engineering and is the winner of the IEEE Rudolf Chope R&D Award and the IET Crompton Medal,” he said.

“He is a shining example to us all,” said Professor Kuo.