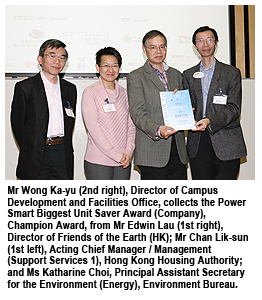 City University of Hong Kong (CityU) has been recognised for its rigorous efforts in creating a low-carbon campus. The University was named Champion in the company category of the recent Power Smart Contest 2010 organised by Friends of the Earth (HK). The name of the award is the “Power Smart” Biggest Unit Saver Award (Company). It is the first time to have the participation by academia.

Professor Way Kuo, CityU President, said the greenhouse effect contributing to air pollution and climate change has become a pressing global issue. With a commitment to building a green campus, CityU has implemented measures such as saving water and energy and recycling and reusing materials to reduce carbon dioxide emissions. 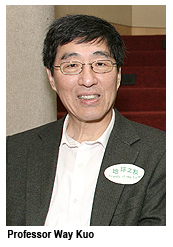 “CityU promotes socially responsible behaviour and eco-friendly practices among staff and students, and encourages the whole campus community to integrate them into their daily life and thinking,” Professor Kuo said. He added that the University will continue to improve its management of environmental protection to help build a sustainable future.

In 2008, CityU signed the Carbon Reduction Charter with the Environmental Protection Department, pledging its support to the “Green Hong Kong – Carbon Audit” initiative. Subsequently, the University has introduced several relevant measures such as energy-efficient T-5 fluorescent tubes which save more than 30% of energy compared to high-bay lighting. In addition, we have reduced the number of fluorescent tubes for public venues on campus by half after using the T-5 tubes in combination with nano-reflectors for a wider lighting area. In addition, LED lighting with photo-sensors is used in semi-open staircases. 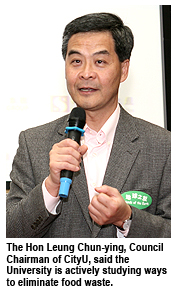 The University has adopted an energy-efficient air-conditioning system by replacing air-cooled chillers with water-cooled units and using newly adjustable energy-efficient chillers to save energy. An energy storage system was installed on campus to store the thermal energy produced during the operation of the chillers. In addition, the air-conditioned room temperatures for public venues and offices are set at 27°C and 25°C, respectively.

CityU has adopted effective measures for the collection and treatment of grey water, too. The effluent water from wash basins, condensate water from air-conditioners and fan coil units in offices and discharged water from laboratories for cooling equipment is filtered, sterilised and purified for watering plants and lawns. Compared with similar water treatment systems in Hong Kong, CityU has the largest. It is capable of converting 70 cubic metres (70,000 litres) of grey water into clean water every day. This amount is equivalent to the daily water consumption of 500 people. The system not only saves natural resources, it reduces CityU’s water bills, too.

Advanced digital power analysers allow CityU to manage the power usage of its offices, in particular reducing energy wastage during non-office hours. A network power management system can monitor and enhance the efficiency of energy use on campus. 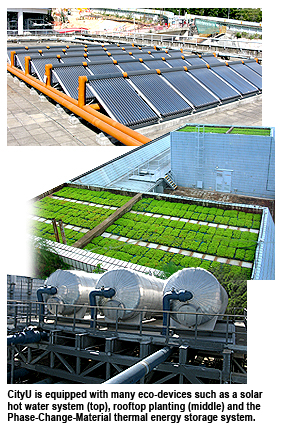 The University is also actively studying ways to deal with food waste. The long-term goal is to eliminate food waste entirely.

To foster CityU’s contribution to the environment and society and promote its measures on energy saving and carbon reduction, CityU Council has set up the Social Responsibility Committee.

CityU has been recognised in the past for its environmental protection efforts. It was awarded ISO 14001 accreditation for nine consecutive years, the Gold Award in the Hong Kong Awards for Environmental Excellence for six consecutive years, the Pioneer Award in the school category of the Hong Kong Energy Efficiency Awards, and the Certificate of Source Separation of Commercial and Industrial Source Programme from the Environmental Protection Department.

The Power Smart Contest required that the energy consumption of participants during the designated period from 15 June to 12 September 2010 (90 consecutive days) be lower than that of the corresponding period in 2009 by at least 2%. CityU stood out because its energy consumption in the designated period decreased by 4.21%, or a saving of 659,757 kWh, which equates to a reduction of 462 metric tonnes of carbon dioxide emissions.

Friends of the Earth (HK) initiated its campaign in 2006 to inculcate a culture of energy saving in Hong Kong. The Power Smart Contest is aimed at encouraging the public to save energy, which is the most direct and cost effective way to reduce air pollutants such as carbon dioxide.