One of the world’s preeminent scientists enthralled an audience at City University of Hong Kong (CityU) this week with an engrossing talk on science, metaphysics, philosophy and art.

The talk by Professor Jean-Marie Lehn, winner of the Nobel Prize in Chemistry and CityU’s Chair Professor-at-Large, was titled “From Matter to Life: Chemistry? Chemistry!” and was part of the City University Distinguished Lecture Series. 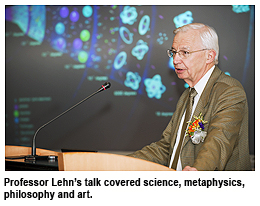 Professor Lehn began with the immediate aftermath of the Big Bang, about 13.7 billion years ago, and swept across oceans of time through to the present day, concluding with some engrossing conjecture about what the future holds for our world.

The central point of the talk was to explore how chemical debris from the dawn of time self-organised into atoms and molecules and grew ever more complex until life eventually evolved. He touched on the pre-Darwinian evolution of simple inorganic matter transforming into more complex inorganic matter, and then went on to discuss the evolution of life in Darwinian terms, from living matter to thinking entities such as humans, before peering into the future. 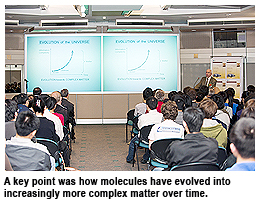 “Evolution has not yet finished,” Professor Lehn told the audience, comprising CityU faculty and staff and secondary school students. “We are just a point in time. The universe doesn’t worry about us. The universe will continue to evolve over time.”

Professor Lehn is regarded as the father of supramolecular chemistry, a field that concerns itself with how molecules self-assemble, self-organise and self-fabricate to form more complex entities. He talked about the “cosmic imperative” that atoms would self-organise after the Big Bang into a kind of molecular sociology because of the inherent structure and physical laws that govern the universe, for instance, electromagnetic forces.

“Chemistry provides the bridge between the molecules of inanimate matter and the highly complex molecular architectures and systems which make up living organisms,” he said.

In a sense, he argued, chemistry can be viewed as an information science since molecules selectively attach and bind with others because of shared information. For instance, the immune system of the human body knows when and how to “attack” unhealthy cells. 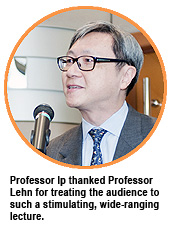 This ability to self-assemble has interesting connotations for the future, Professor Lehn said. Many of the electronic devices we now take for granted, such as mobile phones, are getting slimmer and smaller, but there might come a time when we cannot go any smaller, for technological or financial reasons.

“Maybe one day devices will simply make themselves through self-fabrication,” he suggested. After all, the world’s most powerful computer, the human brain, is a prime example of how molecules self-assemble to create, he said.

In this age of powerful knowledge, Professor Lehn said humans have reached a post-Darwinian stage. “Our path has led us from the tree of knowledge to control of our destiny,” he said, ending with a quote from Leonardo da Vinci: “When nature finishes to produce its own species, man begins using natural things in harmony with this very nature to create an infinity of species.”

Professor Lehn will present a series of lectures on “Perspectives in Chemistry: From Molecular to Supramolecular Chemistry towards Adaptive Chemistry” at CityU on 11 and 12 November.

There are two other City University Distinguished Lectures this week. One is by Dr Barry Lam and the other by Dr Lee Kai-Fu. The two speakers and Professor Lehn will receive honorary doctorates on 11 November at this year’s Congregation, together with Mr Chung Shui-ming and The Hon Andrew Li Kwok-nang.