City University of Hong Kong (CityU) is holding the Holland Cultural Festival 2010 between 11 and 15 October, the first in a series of events aimed at promoting internationalisation on campus and enriching the learning experience of students.

“Holland Cultural Festival 2010 aligns with our five-year Strategic Plan, which aims to develop strategic alliances with other leading institutions in order to extend the quality, breadth and impact of CityU’s research and educational programmes,” said Professor Way Kuo, President of CityU, at the kick-off ceremony for the festival on 12 October. 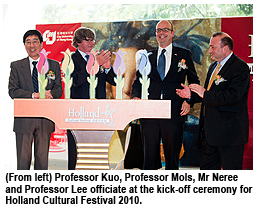 “At the same time, we wish to expand academic partnerships with premier universities for student and staff exchanges, and for joint research and programme development,” he added.

Professor Gregory Lee, Dean of College of Humanities and Social Sciences and Chair Professor of Chinese and Transcultural Studies, thanked all parties involved in the festival and Professor Gerard Mols, Rector Magnificus, Maastricht University (UM), and Mr Alexander de Neree, Chairman of Dutch Chamber of Commerce, added their congratulations, too. 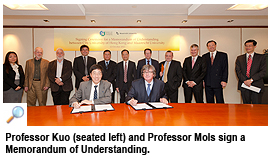 Holland Cultural Festival 2010 was filled with various events, including a talk by Mr Robert Schuddeboom, Consul-General of the Netherlands, a seminar by Professor Mols, a Dutch Cultural Night at Multi-Function Hall A, Student Residence, plus a book display at CityU Library.

On the same day as the kick-off ceremony, CityU signed a Memorandum of Understanding (MoU) with UM. The MoU signifies the principle of mutual benefit and reciprocity for the purpose of promoting academic exchange and research activities. To further enhance academic collaborations and 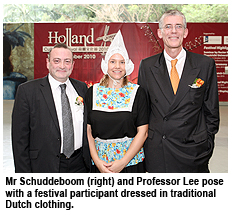 encourage exchanges between UM and CityU, each university will establish two scholarships.

As part of the Holland Cultural Festival 2010 programme, CityU also invited Mr Schuddeboom to talk about the culture of the Netherlands on 14 October.