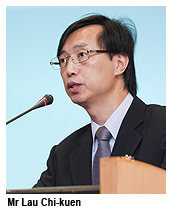 One of Hong Kong’s most experienced journalists gave a talk on how corporations can attract better media coverage as part of a series of sessions initiated by the Communications and Public Relations Office (CPRO) at City University of Hong Kong.

Mr Lau Chi-kuen, Principal Lecturer at the School of Communication of Hong Kong Baptist University and the former Chief Editor of the South China Morning Post, emphasised a number of tips for handling the media at the talk on 6 October.

He touched upon journalists’ expectations of public relations teams and the role of the media in society. His talk was titled “When the Limelight is on you—Reflections of an Ex-journalist” and he used examples of recent local news stories to illustrate how the corporate world handled, or mishandled, public relations issues. 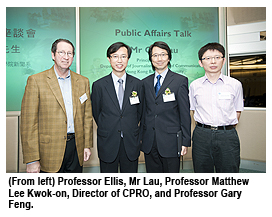 One key point Mr Lau raised was the importance of owning up to errors and not trying to hide mistakes from the public.

“When an organisation encounters a blunder, it is wise to adopt the practice of proactively and voluntarily announcing such a blunder, so as to manage public perception by being the first source of information,” he said.

Mr Lau said the media tended to respond more positively to an organisation that “confirms” a blunder in a timely fashion than to one that acts defensively.

Members of staff involved in any kind of crisis management scenario needed a sense of ownership when dealing with problems, he said, and should feel confident that they would not be made scapegoats. 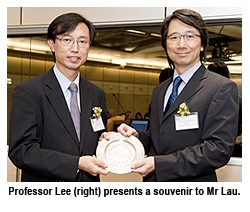 Good communication both internally and externally was imperative, he said, and messages conveyed by the senior management of an organisation needed to be transparent and forthcoming. Open communication tended to dampen media interest and staff curiosity in potential controversies and could boost people’s confidence in the senior management, he said.