CityU and Tsinghua to offer dual master’s programmes in law

The School of Law at City University of Hong Kong (CityU) and the School of Law at Tsinghua University have signed a letter of intent to develop competitive legal professionals for Hong Kong and the mainland. By making use of the respective strengths of both schools, the two universities will jointly offer three dual master’s degree programmes to enable students to receive two master’s degrees in the shortest and most reasonable time. 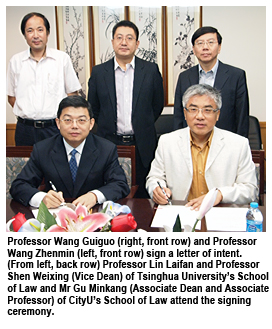 CityU is the first institution in Hong Kong to collaborate with Tsinghua University in law programmes at the master’s level. Under the collaboration framework, students can be awarded degrees from the two universities through arrangements such as credit transfer and studying at one of the universities for a semester. While CityU students can study Chinese law at one of the most prestigious universities on the mainland, Tsinghua law students will benefit from the internationalised legal education offered at CityU.

The Master of Laws in Arbitration and Dispute Resolution (LLMArbDR), which CityU launched in 1991, and the Master of Law Programme in Chinese Law (in English) offered by Tsinghua University, the first formal postgraduate law programme on the mainland, will be one of the dual master’s programmes. The LLMArbDR was the first of its kind in Asia.

Graduates from this dual master’s degree programme will be in strong demand. The need for Chinese law professionals due to the mainland’s flourishing economy means that there is a global trend to use alternative dispute resolutions such as arbitration to settle commercial disputes. The graduates from the proposed dual degree programmes will be well positioned in their careers because they will be proficient in Chinese law as well as in arbitration.