City University of Hong Kong (CityU) has received a HK$100 million donation from The Shaw Foundation Hong Kong Limited to sponsor the University’s development. In appreciation of Sir Run Run Shaw’s significant support and contributions to CityU over the years, a cheque presentation ceremony was held on 22 September. 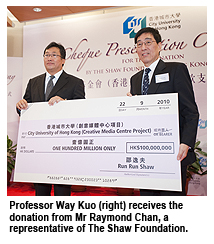 Dr Leung said he was especially moved to witness the historic moment. “The donation has a particularly special meaning to CityU as a young university. The support of The Shaw Foundation presents to all our staff and students a huge incentive to work even harder to accomplish our mission, which is to offer quality professional education and pursue applicable research for the betterment of mankind and society,” Dr Leung said.

The Hon Leung Chun-ying, Council Chairman of CityU, said in a pre-recorded video message that he wished to express on behalf of CityU his sincere gratitude to Sir Run Run. Mr Leung was unable to attend the event in person because he was out of town.

“CityU received a generous donation from Sir Run Run when the University had just been established, and the funding was used for the well-known Run Run Shaw Library on campus,” Mr Leung said. “Today, Sir Run Run once more offered his support to the University. Besides extending our thanks to him, we can now better appreciate Sir Run Run’s far-sighted vision and his care and support for education. It shows that Sir Run Run is not only a successful entrepreneur but also an esteemed philanthropist.” 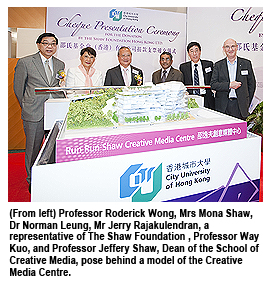 Professor Kuo said the generous donation from The Shaw Foundation was an event worthy of joyous celebration on this auspicious day of Mid-Autumn Festival. “The support extended to the University by Sir Run Run will help CityU achieve its goals as stated in the University’s Strategic Plan 2010-2015: to become a leading global university known for excellence in research and professional education,” Professor Kuo said. “We are indebted to Sir Run Run for his generosity and would like to thank him for his dedicated contribution to CityU and education.”

Sir Run Run, an internationally renowned movie and television magnate, is well known for his philanthropy. He is a staunch supporter of local and mainland education and art development, and he established the Shaw Prize in recent years to promote scientific research. 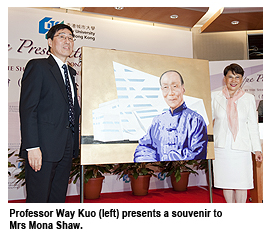 In recognition of The Shaw Foundation’s support, CityU will name the Creative Media Centre (CMC) after Sir Run Run Shaw.

Designed by internationally renowned architect Daniel Libeskind, CMC is scheduled to be completed in 2011. Its striking architecture will become a focal point for the development of creative media in Asia. With state-of-the-art equipment for digital media education and research, CMC will help develop talent for local and overseas creative industries. It will provide a new platform for creative media professionals from all over the world, foster exchanges between academics and industrial practitioners, and promote the development of the creative media industry.