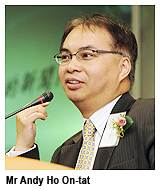 “A company should identify its unique selling point and target audiences before sending out the message, so the message can be conveyed clearly,” said Mr Andy Ho On-tat, Information Coordinator, Office of the Chief Executive of the Hong Kong Special Administrative Region.

The Communications and Public Relations Office (CPRO) of City University of Hong Kong (CityU) invited Mr Ho, a veteran public relations practitioner, to share his experience in dealing with major incidents and discuss with the CityU community the role of new media in contemporary public relations, on 19 March. 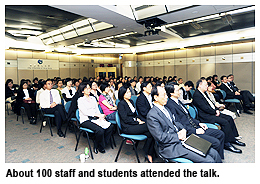 Mr Ho said the spokesperson’s image is also very important. With attributes such as affability, concise and well-paced communication skills, and confidence, the corporate message will be conveyed more effectively.

Mr Ho quoted a survey conducted in the US to illustrate the importance of new media in mass communication. The poll found that more than 60% of people received their news from the internet, including online newspapers, Facebook and others. It has already exceeded traditional media such as radio and newspaper. Consequently, new media should be seen as an obligatory medium of communication to reach the target audience directly. 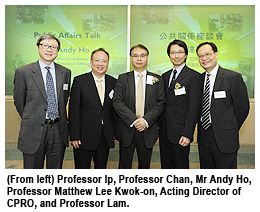 The talk was the first in a public affairs lecture series initiated by CPRO, all featuring veteran industry guest speakers sharing their experience in public relations and the media. The next session will be held on 29 April and feature Mr Tai Keen-man, Assistant Director (Radio) of Radio Television of Hong Kong as the guest speaker.