A tour of discovery on board MV Explorer

More than 20 City University of Hong Kong’s (CityU) faculty, staff and students took a tour on the visiting floating university, MV Explorer, to gain a first-hand experience of on-board education, on 23 February. 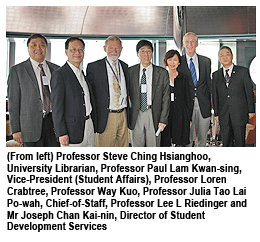 The visit was arranged through CityU President Professor Way Kuo’s former contacts in the US. They are Professor Loren Crabtree, the Executive Dean of the voyage, and Professor Lee L Riedinger, who is a faculty member of the voyage.

Berthed at Ocean Terminal, MV Explorer arrived in Hong Kong on 21 February after a three-day visit in Shanghai. Professor Crabtree, who was the former Chancellor of University of Tennessee, led a group of faculty and students for a visit of the CityU campus and was impressed with the design and facilities of our library.

During the return visit to the cruise, the CityU visitors were welcomed on board by Professor Crabtree and his wife, as well as Professor Riedinger and his wife. They were taken for a tour of the modern eight-year-old cruiseliner, including the lecture theatres, library, dining and workout areas and students’ cabins.

Professor Riedinger gave a brief introduction of the history of Semester at Sea (SAS), administered by the non-profit Institute for Shipboard Education, and the programmes they offered. According to Professor Riedinger, the idea for a floating university was originally proposed nearly 100 years ago. But it was not until the 1960s that the concept of shipboard education finally took hold, thanks to the enormous passion and efforts of a legendary Hong Kong businessman, Mr CY Tung, father of Mr Tung Chee-hwa, the first Chief Executive of the Hong Kong SAR and former CityU Council Chairman. Mr CY Tung, founder of Seawise Foundation, believed ships could transport more than cargo, they could carry ideas. 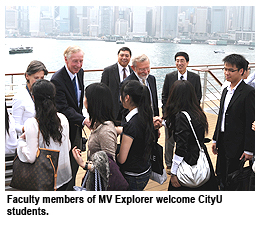 Over the years, the Institute for Shipboard Education has launched about 100 Semester at Sea voyages, educated more than 45,000 students and life-long learners from 1,500 institutions, and travelled to more than 60 countries. While ships and academic sponsors have changed, the commitment of the Tung family to SAS continues to this day. It will continue to open up the world to more people “on a voyage of discovery across the oceans wide where the waves uncurl”.

“Mr Tung is crucial to the success of SAS,” said Professor Riedinger, pointing to the portrait of Mr CY Tung hanging on the wall of the grand foyer.

Professor Kuo thanked the hosts for conducting the visit. “This visit to SAS is very unique. Both SAS and CityU have a close association with the Tung family. While the SAS benefits from the sponsorship of the Tung family, CityU benefited from the guidance of Mr Tung Chee-hwa, who served as CityU Council Chairman between 1995 and 1996.”